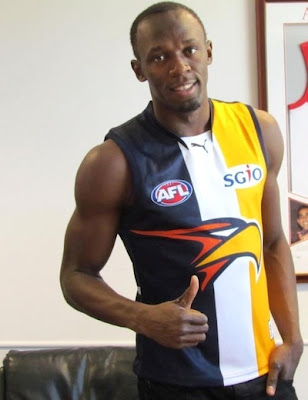 RIGHT TO BARE ARMS: Oct. 4, Australia. During a visit to the PUMA headquarters in Melbourne, the World's Fastest Man was photographed showing off his toned arms and giving the thumbs up while modelling a West Coast Eagles football shirt. The A-League soccer club also posted the pic on their Facebook page with the caption, "Think we could add some pace to our midfield?" Bolt, who is on holiday in the Oceanic country, recently spent time in Sydney before heading over to Melbourne. (Photo: The Australian) 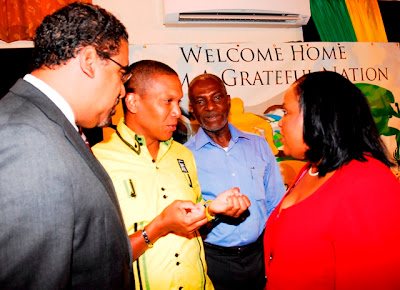 BEST LAID PLANS: Oct. 3, Kingston. LIME Chairman Chris Dehring chats with tourism minister Wykeham McNeil (left); Don Anderson, Chef de Mission of the 2012 Olympic team; and Minister Natalie Neita-Headley following a press conference hosted at Jamaica House on Wednesday to announce plans for the staging of the Olympic athletes’ homecoming celebration. The telecomms company, meantime, has revealed that it will be facilitating the viewing of the celebrations in select parishes across the island. (Photo: LIME) 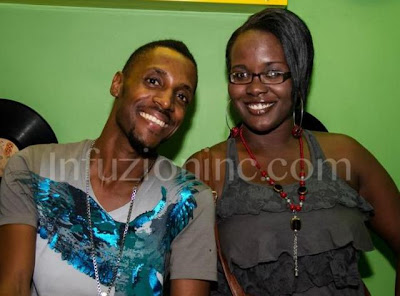 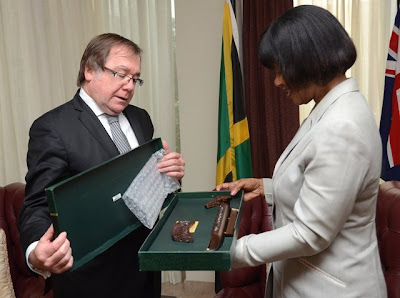 WHAT'S IN THE BOX?: Oct. 3, Kingston. PM Portia Simpson-Miller is delighted on receiving a special gift from New Zealand’s Minister of Foreign Affairs and Sport Recreation, Murray McCully, during a courtesy call at Jamaica House. McCully heads a delegation exploring areas for the deepening of relations and co-operation between Jamaica and New Zealand. Minister McCully told Simpson-Miller that he has been promoting the idea of a closer linkage between the Pacific Island Forum and CARICOM to explore areas of climate change, agriculture and fisheries, as he believes that if both regions strengthen their cooperation, much more can be achieved. Simpson-Miller welcomed the initiative, noting that for CARICOM to be part of a larger organization that can make better representation for the countries at the UN is a welcomed move. (Photo: OPM)