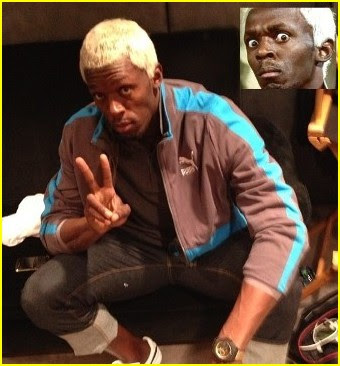 GOING PLATINUM: Bolt backstage at SNL; Inset, in "The Californians."

World-record-holder? Check. Multiple-brand ambassador? Check. King of comedy? As it turns out, quite possibly.

On Saturday night, Olympic legend Usain Bolt made a surprising and delightful cameo appearance on NBC’s venerable ratings powerhouse Saturday Night Live, bringing the funny opposite hostess Christina Applegate and show regulars like Bill Hader and Jason Sudeikis. Showing up in a laugh-out-loud send-up of over-the-top Cali natives called “The Californians,” Bolt played a young man (sporting an accent and platinum blonde hair a la Chris Brown!) searching for his biological father. Too funny for words. If anything, Bolt’s successful stint on the popular sketch-comedy show proves that his innate gifts extend even to the performing arts. Clearly a spotlight natural.

Meantime, while in Japan last week for the Nissan GT-R presentation at the auto giant’s Yokohama headquarters, the sprint superstar chatted with Nissan TV about life in the fast lane and the work of his non-profit foundation. “My motto is the kids are the future,’ Bolt said. “That’s why I base my foundation on developing the kids of Jamaica, and hopefully around the world soon.” Check out the clip:

Posted by TALLAWAH Magazine (tallawahmagazine@gmail.com) at 10:36 am