WONDER WOMAN: Shelly-Ann Fraser-Pryce sounds off on her happy marriage and life in the fast lane 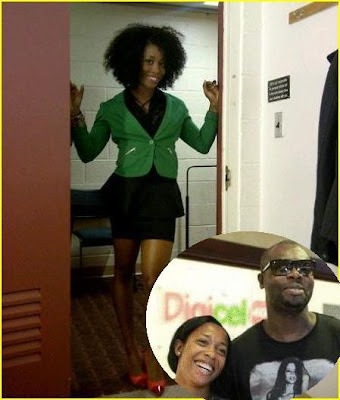 IN THIS TOGETHER: “It could be before 2016,“ says Fraser-Pryce of starting a family. Inset, with husband Jason in Kingston.

You can say this for Shelly-Ann Fraser-Pryce: the girl’s got that winning mix of speed, beauty and brains. Still basking in the glow of a golden 2012 season, the extraordinary 25-year-old sprint queen (sporting a bright-pink ensemble, big hair and that megawatt smile) sat down recently with Profile’s Ian Boyne for a sometimes fascinating, always delightful peek into her life as a wife, Christian, and future mother skillfully navigating life as the Pocket Rocket. Below, excerpts from their conversation:

On married life with husband of one year, Jason Pryce:
“It’s a typical marriage. We still have our problems, but one thing we always talk about is that even if we have a disagreement and are angry with each other, we must always sleep in the same bed. A friend of mine told me when I was getting married that you must never go to bed mad. So we always try to reconcile the matter before going to bed..… He’s very helpful around the house. He does the cooking and he’s a very good cook. Very good.”

On choosing to ditch the single life:
“I decided to get married because of my faith. I was living in a common-law situation (since 2008) and (marriage) was the next step I wanted to take, and in order to make that step I had to make sure that my house was in order. It’s a commitment for a lifetime. It’s not a joke for me when they say ‘Till death do us part.’ I mean it. So if you’re going to make a commitment I believe you have to stick with it no matter what.”

On plans to start a family:
“We talk about having a child and he’s eager to have a child. Whenever I say I’m looking forward to the 2016 Olympics he looks at me like, Are you serious? (Laughs). What I try to do is make decisions as I go along, but I will never get caught in a trap where I’m just running, running and forgetting about my husband and the family that we want to build because that’s also important... It could be before 2016 but I don’t know. I just go with the flow…. And the thing with Jason and I is that we are on the same page……I want for my kids the things that my [single] mother was not able to give to me. I want to give that joy to my children as they grow up so they can become great women and men in the future.”

On the upside of having money – and giving back:
“Things have changed in such a way that I am now better able to assist my family. I love to help. I think helping is one of the biggest parts of who I am. I know how it is out there; I know the struggles persons can go through, and for me one of the things I am more inclined to do is to help through education because I know how vital it is. You can never stop learning.”

Posted by TALLAWAH Magazine (tallawahmagazine@gmail.com) at 12:05 am