ALBUM OF THE WEEK: Rihanna’s Unapologetic is replete with defiance and dance grooves 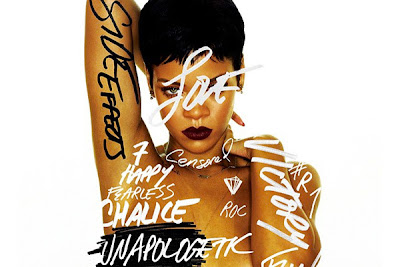 WILD AT HEART: Rihanna's latest is an edgy-electric chart-topper.

At this point in the game, unstoppable seems the most apt adjective to summon in describing Rihanna, the high-flying pop superstar who could give the Energizer Bunny a proper run for the money. She just keeps going and going – even when her troubled, tabloid-y personal life threatens to eclipse her hard labour, marked by consistent global tours and dropping new music at near-Usain Bolt speed.

Now comes her latest effort, the cheekily titled Unapologetic, which some might deem a subtle shot at the detractors who have taken her to task (yet again) over the rumoured rekindling of her romance with singer Chris Brown, who infamously beat her to a pulp back in February 2009, on the eve of the Grammys.

As we’ve come to anticipate, much of Rihanna’s new music compellingly mirrors this latest phase of her trajectory, and as such she comes out swinging on the bumpin’, radio-ready jam “Nobody’s Business,” which features guest vocals from Brown. With its slick beat and in-your-face lyrics, it’s an easy standout. It helps, too, that the duo share an effortless rapport as they trade lines about being crazy for each other in spite of popular public opinion. Art imitating life?

Sparring of a slightly similar stripe plays out on the Eminem-assisted “Numb,” about falling hard for the wrong kind of love, and “Loveeeee Song,” a mild banger with relative newcomer Future.

Unapologetic, the singer’s seventh album, has already hit number one across the pond (and lately on the Billboard Top 200), and while it’s not a tour-de-force like, say, 2007’s Good Girl Gone Bad or 2009’s Rated R, it’s a solid effort packing enough heat – slinky pop grooves, R&B-electro cuts, daring/defiance – to satisfy her core fanbase.

Enchanting lead-off single “Diamonds” (a Stargate/Sia Furler creation) is an instant winner from the first few notes and one of the year’s best jams. Expect it to rightfully turn up on numerous Top Ten lists for 2012. Other noteworthy highlights? The dark, dancehall-sampling “No Love Allowed”; the rock-lite “Lost in Paradise” (also produced by StarGate); and “Love without Tragedy,” a tear-soaked lament perfect for the Instagram generation. Tyrone's Verdict: B+

Email ThisBlogThis!Share to TwitterShare to FacebookShare to Pinterest
Labels: Album of the Week, Music Reviews, Rihanna