CURTAINS UP: Members of the JYT pose with their multiple awards.

The Jamaica Youth Theatre emerged the darling of this year’s Tallawah, the annual tertiary drama festival hosted by UWI Mona’s Philip Sherlock Centre, snagging a handful of key prizes (and high-commendation awards), including the coveted Shell Trophy for Best Production, for their absorbing and folkloric presentation Bellywoman.

Fontain Jones was named Best Actor for his smart, convincing portrayal of an evil backra in Bellywoman, while the troupe’s other entry Jubilation 50 claimed the award for Best Music. Other big winners: the UWI Dramatic Arts Society (UDAS) for their splendidly rustic Village Mattaz and EXED, who copped a pair of technical awards for their entry Two Can Play.

Over 30 groups participated in this year’s iteration of Tallawah (coincidentally the 45th anniversary), offering some 15 plays, 10 monologues and four poems. “There’s always lots of energy,” notes festival co-ordinator Brian Heap, while citing that ubiquitous catchall concerning room for improvement. “We are constantly refining the categories to give the students more opportunities to excel… and we are encouraging the groups to improve and to become more aware of the art form of theatre.” 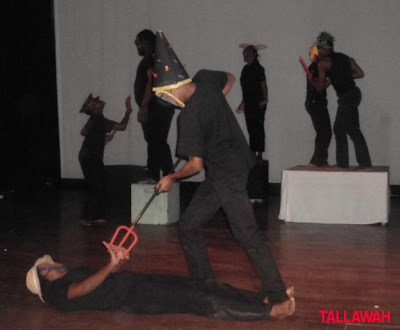 Posted by TALLAWAH Magazine (tallawahmagazine@gmail.com) at 12:49 am