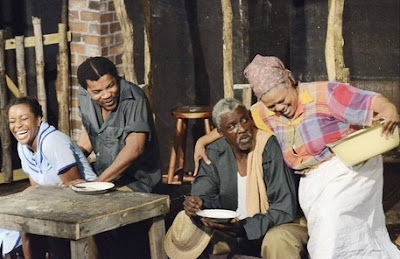 OLD STORY TIME: Cast members in a scene from Pularchie earlier this year

So far in 2012, it’s been a noteworthy time of lively Jamaica 50-themed revues, wise-cracking comedies, intense dramas, and the occasional potboiler seemingly intent on blending elements from all genres.

For the likes of Pablo Hoilett and the cast of the impeccably revived Stanley, Fay, Pularchie & P, it’s been a memorable year, too, as they stake their claim as genuinely worthy awards-season hopefuls – especially in the areas of acting, directing and production. Also making noise? The deliriously witty and well-written Jamaica Fifty 2 Rahtid seems almost a sure-bet pick for Best Production and Best Revue nominations.

As far drama goes, the Edna Manley College’s deeply disturbing and heartbreaking Ruined seriously warrants a mention in any conversation about the year’s finest shows. Then there’s Keiran King and Paul Issa’s gorgeously staged Mr. & Mrs. Blacke, which not only delivered some rip-roaring dialogue but sumptuous scenery as well in its compelling exploration of a marriage on the rocks. In terms of full-on musicals, we’re already looking at Father HoLung & Friends’ visceral and lyrically robust The Messiah and the Jamaica Youth Theatre’s Hercules.

As the clock winds down on the year, TALLAWAH is keeping a sharp eye on the horizon for God’s Way 2, Wine & Roses, and a host of upcoming productions (Jambiz, LTM, Stages, Basil Dawkins), certain to be jockeying for a spot on the prestigious end-of-year list – not to mention consideration for the all-important Thespy and Actor Boy Awards.

Posted by TALLAWAH Magazine (tallawahmagazine@gmail.com) at 12:16 am