LAW & ORDER: At its best, Courthouse Drama is a crazy-lively romp 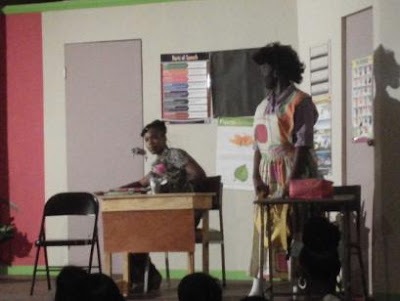 CLASS IN SESSION: Wright and Davis share a scene.

On the surface, Courthouse Drama feels like two plays in one, which isn’t at all surprising in the end, given that the production takes on so many hot-button issues (with fair overall results), including teenage dyslexia, small-business entrepreneurship, domestic service, love-triangle drama and paternal delinquency. And smack in the centre of all the fireworks is the force-of-nature who goes by Delcita (Andrea Wright), the fast-talking, take-no-mess livewire who is essentially the life of the party and an engaging, unfailingly funny presence throughout.

Penned by Paul Beale (collaborating with Wright for the umpteenth time), the show’s first half is largely centred on Delcita’s struggles to graduate from school with a solid basic education when faced with severe reading-learning difficulties – not to mention a less-than-pleasant home life and an education system fraught with shortcomings.

The experience of watching it all unfold comes with some genuinely amusing moments, which only grow in intensity once we enter the second half, mainly featuring a courtroom showdown between a deadbeat dad, Diamond Francis (Dennis Titus) and his babymother and Delcita’s boss, Pamella (Sherene Davis), whom he refuses to support financially. It soon becomes a job for Delcita (and the vociferous judge) to let justice prevail.

Given the country’s staggering socio-economic status quo, Courthouse Drama boasts plot points that should resonate with viewers of all stripes – even when the writing slips into stereotype and caricature. Even so, Wright (who dons a second hat as director) acts as a sort of reliable core thread holding the fabric in place. And she gets nice support from Margaret Wilson, Donald Thompson, Patrick Smith, Davis and Titus, who comprise the supporting cast.

Lively and populated by crazy-cunning characters, Courthouse Drama is an entertaining romp that in spite of its shortcomings has something relevant to say and worth hearing. Tyrone’s Verdict: B-