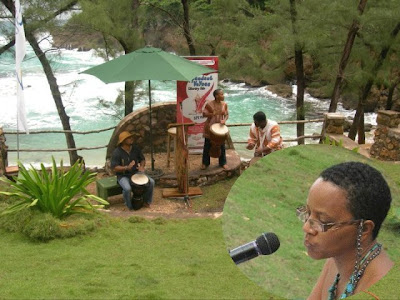 AL FRESCO: A gorgeous scene from the festival in St. Mary in 2011; Inset, Falloon-Reid.

The increasingly popular Independent VoYces literary fiesta is returning to the culture scene for its third annual staging this month – but organizers and festivalgoers are set to embrace a new venue: the Scotchie's and Walter's Bar, situated at Columbus Park in Discovery Bay, St. Ann.

Chief organizers Judith Falloon-Reid and Hugh Shim say they are excited about the move, brought out about by the recent passage of Hurricane Sandy. “We were already suffering from a lack of adequate sponsorship and then Sandy came along and made things worse,” explains the duo. “The management of Scotchie's offered the use of their new location – an expansive wooden deck overlooking the sea at historic Columbus Park, fully equipped with all the amenities we needed to make the fair a success. Naturally, we jumped at the offer.”

No doubt patrons will also delight in the serene surroundings, perfect for an event of this nature. Customarily a day-into-night of readings and poetry spotlighting a bunch of new and established writers, the fiesta (Nov. 24, 11am to 8 pm) is being headlined this year by musician Lasana Bandele, recipient of the 2012 Independent VoYces Lifetime Achievement Award and Dr. Michael Abrahams, recipient of the Independent VoYce Award.

Also set to grace the stage: published authors Barbara Blake-Hannah, Melanie Schwapp, Millicent Lynch, Veronica Carnegie, and Falloon-Reid herself. Dalton Spence is among the poets down to participate, while 10-year old Seychelle Doyley will be the featured child poet. To learn more about the event, go to independentvoyces.com or visit facebook.com/independentvoyces.