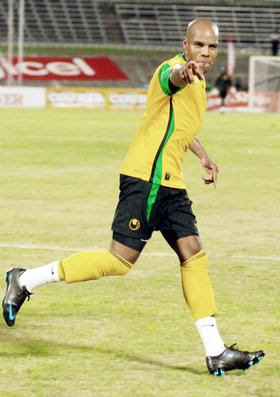 ON THE MOVE: "They will always have my respect," says King of the JFF.

Just as the Jamaica Football Federation was gearing up to woo him back to the senior Reggae Boyz programme, star striker Marlon King has thrown a curve ball – announcing his retirement from international football.

The 32-year-old baller, who was omitted from the squad’s last couple of big matches owing to his suspension, made the surprising announcement on Sunday via the statement below:

“It is with the deepest regret that I Marlon King have today decided to retire myself from international football. I have always given my all to the Jamaican football team and have some very fond memories of my achievements within the squad. I would like to take this opportunity to thank Captain Burrell and Carl Brown for their outstanding support during my time with the JFF. They will always have my complete respect. I would also like to thank the Jamaican public and my fans for their support and wish the squad the very best in achieving world cup qualification.”

Think about it: Even if Marlon King did rejoin the national set-up wouldn’t that have created an awkward situation in the camp? After all, he and the incumbent head coach, Theodore Whitmore, don’t get along. They don’t see eye to eye and that is public knowledge.

Sure, they could have put aside their personal differences for the ultimate benefit of the team, which is desperately attempting to qualify for the next World Cup, but clearly such a development wasn’t meant to be. And now both parties are going their separate ways. Perhaps it’s for the best.