TALLAWAH BOOK CLUB: Grace: A Memoir explores the making of a style legend 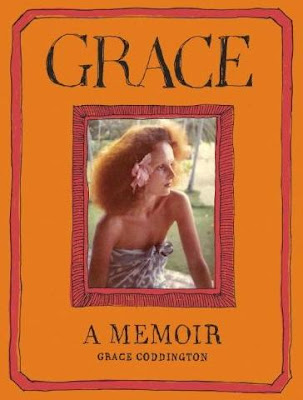 AMAZING GRACE: Coddington, in her own words. Cover image shot in Jamaica, 1975.

It’s hard not to like Grace Coddington, Vogue’s legendary and brilliant Creative Director and the woman rightly dubbed the world’s greatest living stylist. But there’s so much more to Grace than haute couture and that head of riotous red hair which makes her instantly recognizable.

Her legions of admirers are finally getting a first-hand account of her journey with the release of Grace: A Memoir, her charming and utterly candid report of her life so far, out this month via Random House.

Writing in a characteristically lyrical and forthright voice, Coddington shares such highlights as her days as model who won a 1959 British Vogue modelling contest, her joyous romances and painful losses – all in the run-up to her eventual ascension to the status of international icon, to whom many were introduced thanks to 2009’s insightful, behind-the-scenes documentary The September Issue. As TIME magazine has quipped, “If (Anna) Wintour is the Pope… Coddington is Michelangelo trying to paint a fresh version of the Sistine Chapel twelve times a year.”

And Grace does have a Jamaican connection of sorts; Turns out the cover image (see above) is a portrait done by Norman Parkinson from a session on location in Jamaica in 1975, proving that not only is Grace a style legend, she’s also a globe-trotting inspiration.

>> COMING SOON: Prolific novelist Anthony C. Winkler, who only recently put out the historical saga God Carlos, already has another buzzworthy release on the horizon. The Family Mansion, which continues his exploration of Jamaica’s colonial legacy, will be published by Akashic in May 2013.