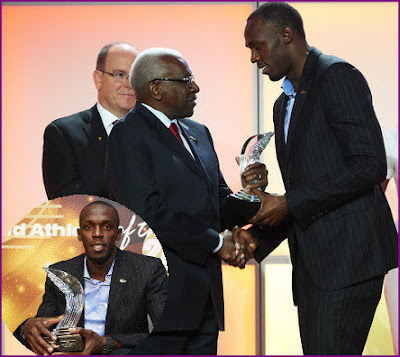 WINNER TAKES ALL: Accepting the award from IAAF president Lamine Diack, while Prince Albert II of Monaco looks on.

“Fourth time is the new charm. Thanks to God, my parents, coach and all the fans,” Usain Bolt tweeted to his 2.3 million Twitter followers on Saturday, moments after nabbing the 2012 World Athlete of the Year trophy at the IAAF Centenary Gala in Barcelona, Spain. This is indeed Bolt’s fourth lien on the coveted prize, having previously walked away with it in 2008, 2009 and 2011. And truly well-deserved, too, following an exceptional season, highlighted by a triple-gold-medal haul at the Summer Olympics in London.

But the World’s Fastest Man wasn’t the only Jamaican recognized at the swanky ceremony in Barcelona, as his coach Glen Mills was presented with the Coaching Lifetime Achievement Award. The American sprinter Allyson Felix claimed the Female Athlete of the Year prize. Meantime, Bolt later tweeted a lovely group photo, as he stepped out to celebrate his big win with the usual suspects, agent Ricky Simms and business manager Nugent Walker.