THE NEW GIRL: From music to film to fashion, Africa’s got a hold on Kelissa McDonald 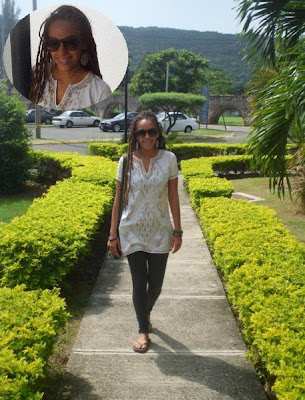 On a picture-perfect Tuesday afternoon on the Mona Campus, Kelissa McDonald has Africa on the mind, but specifically its rich history and amazing inhabitants. Looking cool and serene in a pair of cat-eye shades, a breezy white top, grey leggings and her lovely locks sweeping her shoulders, the 23-year-old is quick to debunk long-held myths and misconceptions about the Motherland. “There are so many stereotypes about Africans – especially that they are all backward and tribal,” she says. “It’s been this image that has been portrayed by the West, and it’s a bad image that is even more harmful for those of us who come from Africa.”

To say the least, McDonald knows what she’s talking about. Not only has she visited Africa on numerous occasions, she called Tanzania home for three years, moving there with her musician parents in her teens and even attended an international school. “It was a beautiful thing for me to have lived there, especially at the height of the high-school years. I was opened up to so many cultures and nationalities,” says the burgeoning musician, who also studied at Kingston’s Immaculate Conception and graduated from Whittier College with a degree in African Studies four years ago. “In Africa, you really learn about the world.”

So you can imagine her delight at reconnecting with her roots this past August on a six-country sojourn with the 50 Days In Afrika documentary crew, alongside filmmakers Donisha Prendergast and Mykal Cushnie. Rejuvenated, she retuned to Jamaica only a week ago, all the better for what she deems another life-affirming experience. Sponsored by the CHASE Fund and Supreme Ventures, the adventure took them to Kenya, Nigeria, Ghana, Tanzania, Ethiopia and South Africa. “This trip meant a lot to us,” McDonald says.

One particular territory proved a fascinating highlight for her. “Ghana has the most connections to Jamaica that I’ve ever seen. It’s amazing. They even have them Anansi stories. And these are the kinds of things we need to be teaching about Africa. Yes, there’s poverty and struggle, but there’s so much more,” McDonald emphasizes. “For me, it was really interesting because my line of work always leads back to Africa.”

Whether she’s talking about her upcoming T-shirt line, Anbessa; the great “dilemma” of her skin colour (“I’m mixed up with everything,” she laughs); or her devotion to her music, Kelissa comes across as a wise woman of many talents and a conscious sistren comfortable with who she is. “What I’ve come to understand is that I can’t let people classify me,” she concedes. “Reggae music is what gives me the acceptance wherever I go.”

And speaking of her music, she has a terrific new 6-track EP called Rebel In Disguise, set to drop any day now. “It’s a versatile set of songs,” says the singer-songwriter, who cites the likes of Richie Spice among her vast number of global influences. “People can expect a mix of African sounds, reggae, and something they can genuinely enjoy.”

RELATED ARTICLE:
A Higher Trod: The team behind 50 Days In Afrika