TURNING OVER A NEW LEAF: Busy Signal on the biggest life lesson he gleaned from his ordeal 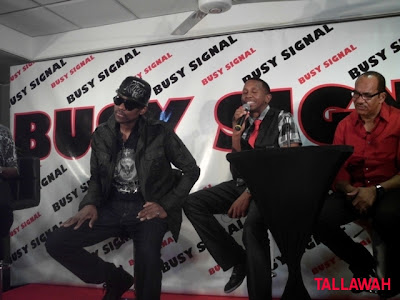 Slimmed-down and attired in all-black (including deep dark shades and a baseball cap), Busy Signal stills bears physical signs of his recent legal troubles and six-month imprisonment in the States on a charge of absconding bail. But when he speaks, he makes it abundantly clear that he’s in a different place psychologically. In fact, the deejay, whose official name is now Reanno Devon Gordon, thanks a successful deed poll, is ready to turn over a new leaf with renewed focus on his recording career and strengthening ties with this family and close associates.

On Monday (a few days after his return to the island), the 32-year-old deejay addressed journalists at a well-attended press conference inside the Devonshire, Devon House. Responding to a question from TALLAWAH, he spoke about the biggest life lesson he’s taking away from the experience as he enters the next chapter of his life:

“This was something from January of 2002 that came back to haunt me. So I had it on my mind for 10 years; I’d been walking with this 2002. That’s why Busy Signal is not a smiley kind of person. So what did I learn from all this? Personally, I learn to keep a clean record, a good record. Don’t get yourself inna no problem because things will come back to haunt you. So right now mi plan to keep on the straight and narrow and don’t get on the wrong side of the law.”

Posted by TALLAWAH Magazine (tallawahmagazine@gmail.com) at 2:47 am