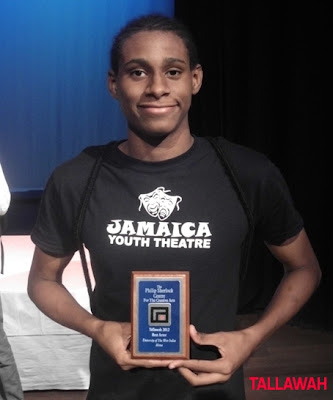 BORN TO WIN: Jones poses with his award. Below, with Alwyn Scott in 2011's A Gift for Mom.

“I’m overjoyed,” gushed Fontain Jones in response to picking up the Best Actor award at Sunday’s Best of Tallawah at Mona’s Philip Sherlock Centre, for his fierce performance as a black-hearted white backra in the Jamaica Youth Theatre’s Bellywoman. For those who know him, the 18-year-old’s triumph didn’t come as a surprise, as he’s been quietly exuding a sort of next-big-thing appeal for quite some time:

WHY HE LOOKS FAMILIAR:
Jones got an early master class in acting in October 2011 when he was plucked from relative obscurity to star in Basil Dawkins’ revival of A Gift for Mom, opposite Ruth HoShing and Alwyn Scott. “It was a different experience for me,” he admits. “I’d never played a role like that before. It was a very interesting learning experience, and I’m glad that I was able to do it.”


LEARNING CURVE:
Now enrolled at the University of the West Indies, these days the Ardenne High alum is a freshman pupil studying advanced Mathematics and Physics. “I hope to do Engineering next year,” he says.

A TALE OF TWO PASSIONS:
“For me, the arts is a hobby that I really love. I love to express myself through the arts,” says Jones, who admires such actors as Shia LaBeouf and Tony Shalhoub, “but the sciences is something that I have loved from much younger.”

JAMAICA YOUTH THEATRE:
Jones says he’s been getting a proper performing-arts education through his involvement with the JYT. “It’s an incredible group, and it’s all about building ourselves as actors,” he emphasizes. “It’s about having a passion for the arts and accepting everybody as they are – faults and what they’re great at. It’s a great pleasure being in a group like that.”

FUTURE PLANS:
“Career-wise, I want to do engineering,” Jones tells TALLAWAH, “but in terms of the arts, I’ll always be available if [a director or producer] wants me to perform in a production.”

Posted by TALLAWAH Magazine (tallawahmagazine@gmail.com) at 12:57 am

Email ThisBlogThis!Share to TwitterShare to FacebookShare to Pinterest
Labels: Awards and Prizes, Ones To Watch, Stage Stars, Youth Spotlight