A TOUCH OF FANTASY: Jamaica Junior Theatre aims for whimsy and magic with Alice: The Musical 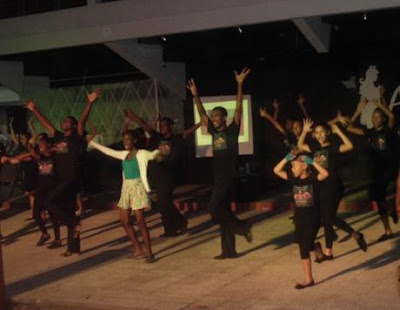 Each year, you never know what the Jamaica Junior Theatre Company (JJTC) will pull out of the proverbial hat. On the heels of last year’s mythology-spiked song-and-dance hit Hercules, the gang is getting ready to wow audiences anew with a touch of fantasy courtesy of Alice: The Musical, a fresh take on the famed fairy-tale.

Forget Tim Burton’s whimsical big-screen incarnation starring Johnny Depp. This is Alice with a darker twist. “We couldn’t do everything that they could do in the movie, so we decided to make it a little darker than it normally is,” explains Peter Haley (below), who is returning to the director’s chair. “It’s still a fairy-tale story and it’s fun, but it’s a lot of hard work.”

As it happens, this version of Alice (with accents on self-discovery, exploration, and seizing the day) finds the young explorer on the cusp of her sixteenth birthday. But you know the frisky White Rabbit will soon appear leading her down to the magical world of Underland, populated by such colourful denizens as The Mad Hatter, The Cheshire Cat, Doremouse, Dodo and, of course, the evil Red Queen and her beloved Jabberwocky.

An enormous cast of youngsters (some 50-odd actors, singers and dancers), led by the likes of David Andrew Reid, Justine Rookwood and Ricardo Barrett, will bring the production to life. “There are so many people involved in this, and 50 of the little darlings are really putting everything into it,” Haley says. “We’ve done a lot of successful shows in the past like Hercules last year, but I never am pleased until opening night. We’ve got so much to do with so little time, but they’re working really hard on this show. So we’re keeping our fingers crossed that it will come off.”

This past Monday evening, the Company staged an intimate press launch on the lawns of UWI Mona’s Philip Sherlock Centre, where they treated those in attendance to exuberant snippets from the show, before making a special presentation to the non-governmental agency Children First, their 2013 charity of choice. Alice: The Musical will play at the Philip Sherlock Centre, from Jan. 4 through Feb. 17. For more info, go to jamaicamusicaltheatre.com.

Posted by TALLAWAH Magazine (tallawahmagazine@gmail.com) at 1:02 am