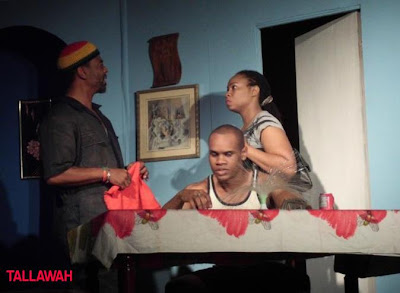 “My life is half-gone. I have to just make the best of what’s left of it,” laments Carol Beechman, the 45-year-old anti-heroine (played wonderfully by Rosie Murray) at the centre of David Tulloch’s sex-and-scandal dramedy Wine & Roses, which just wrapped a limited run at the Pantry. But methinks Carol doth protest too much. In addition to living in a lovely upper St. Andrew home and enjoying a successful business career, she’s carrying on a steamy affair with a hunky 18-year-old stud, Jonathan (Fabian Barracks, terrific), who worships and thinks the world of her.

But in the way that these things often happen, their torrid romance soon experiences its share of problems, what with Carol’s estranged husband, Edgar (Carl Davis) suddenly re-entering the picture and Jonathan’s sternly disapproving Christian mother (Racquel McLean) determined to protect her golden boy from predators of all stripes. As you can well imagine, it’s all heading to an explosive climax, marked by tears and lives being permanently transformed.

As with previous Tulloch productions, the process of arriving at the conclusion is a largely meandering and entertaining ride. To wit, Wine & Roses is best described as a fast-paced, funny-nasty and eye-opening look at adultery, lust, the complexities of family, and the arrogance of youth. Tulloch, who likes to provoke audiences with his radical ideas, does an awesome job of painting a realistic portrait of the older woman-younger man relationship as well as the consequences of people’s actions – even though in the end, he ties up the storylines a bit too neatly.

The set is lovely, as well as the varied lighting, but I didn’t much care for the uninspired reggae-dancehall soundtrack. Best of all, what I admired were the well-drawn and complicated characters brought to life by solid acting. Indeed, the show spotlights a marvelously dominant breakout performance by Barracks as the golden boy and high-school star, whose father’s “death” is shrouded in secrecy. He is well supported by the likes of Rodney Campbell as Deiko, the street-wise Rastafarian mechanic he looks to for advice, and a sprightly Keisha Patterson as his giddy schoolmate Elicia, who’s obsessed with him.

Full of humour and wit, and laced with moments of clarity and dramatic intensity, Wine & Roses is an ultimately seductive and satisfying look at intimacy and relationships and the complex lives of the people who share them. Tyrone’s Verdict: B+

Posted by TALLAWAH Magazine (tallawahmagazine@gmail.com) at 8:28 am