BEAUTY OF THE WEEK: Embracing the fun challenges of fashion and family is Linton-George’s reality 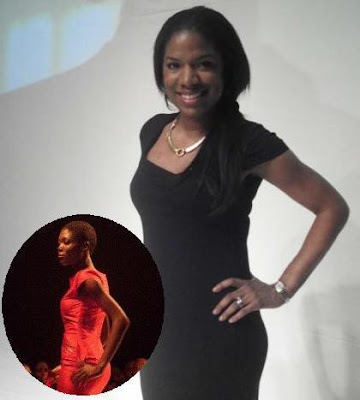 STRIKE A POSE: Linton-George, photographed at the Courtleigh. Inset: a model wearing a "Lady In Red" design.

When Keneea Linton-George appeared on the runway to acknowledge the delighted audience at the end of last Tuesday’s preview of her breathtaking new “Lady in Red” collection inside the Courtleigh Auditorium, she exuded that mix of radiance and self-fulfillment that all designers exhibit when they know they’ve pulled off an incredible feat of fashion that resonates with their viewers. Think Donna Karan meets Tracy Reese.

Wearing a chic, form-fitting LBD and a fresh face, the designer admitted to me after the show that completing the elegant new collection to her exacting standards was indeed the most gargantuan task of her career. And its successful debut, I imagine, is reward for how she’s been pushing herself in her work. “I think this collection was the most challenging,” she explains. “Usually when I do a collection, it’s 12 pieces. This collection is 22 pieces. It was actually 24, but I pulled two of the other pieces because of model issues. But with 22, 24, I really challenged myself right there.”

One of Linton-George’s brilliant young “discoveries” (thanks to Mission Catwalk), Gregory Williams, has also been challenging himself these days, currently across the pond pursuing design studies. “Gregory is in London now finishing up with school and then he’s gonna come back and prepare for [London Fashion Week],” says Linton-George, conceptualizer and executive producer of the fashion reality series. “We had him do it in February, so he could get the international exposure first and be ready for the international stage. Because if we had sent him right after Mission Catwalk, it wouldn’t have been much of a learning experience for him.”

What’s in store for the 2013 season of MC? “Just expect the same amazing personalities and talented designers.” Any truth to the gossip that she and husband Brian George have a bun in the oven? “No bun in the oven yet,” Keneea replies with a giggle, “but I’m trying though. I’m really trying.”

Email ThisBlogThis!Share to TwitterShare to FacebookShare to Pinterest
Labels: Beauty of the Week, Fashion, Keneea Linton-George, The Style File