BOLT on CNN’s Piers Morgan: The sprinter channels his inner Bob Marley, dishes on the single life, and looks to Rio 2016 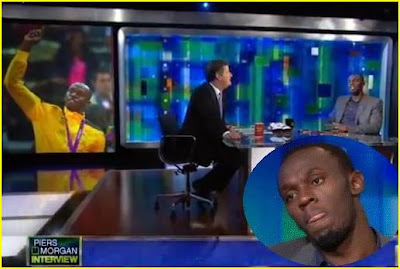 ASK ME ANYTHING: The sprinter goes one-on-one with the ace journalist.

“I’ve tried though, but I can’t really sing. It’s not my talent,” Usain Bolt confesses with a laugh, before launching into a pretty decent-sounding rendition of Bob Marley’s “One Love.” The World’s Fastest Man was making his long-anticipated appearance on Piers Morgan Tonight, which finally aired on CNN this past Tuesday night. “That’s the only song I really know, so I practise it a lot,” Bolt says of the universal anthem. “It’s a worldwide song. Whenever I go anywhere and I start singing it the crowd just takes over.”

Whether sparring with Morgan over their rival football clubs (Bolt sides with Manchester United, Morgan is an Arsenal man); dishing on his personal life (“I’m single right now”); or looking to the 2016 Rio Summer Olympics (“I’ll be there without a doubt”), the 26-year-old superstar was a delightful, charismatic presence on the show, smartly outfitted in a grey PUMA suit.

>> Take a look at this excerpt: