CATCHING UP WITH: Emprezz Mullings riffs on Café Africa and lessons from motherhood and marriage 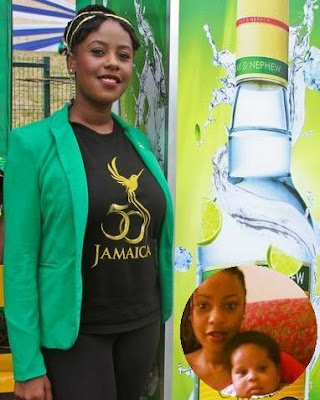 GREEN DAY: "There are some tears, but I'm enjoying it," Emprezz says of being a mom.

Effectively balancing home life and career is by now second nature to workaholic Emprezz Golding, whose mountain of responsibilities not only includes raising a child and being a great wife but also steering her labour-of-love television series Talk Up Yout’ to new creative heights, as it gets set to enter its third season next year. “Season 2 we’re gonna run from January to April and Season 3, we’re gonna run from April on,” she tells me, glowing from crown to sole at last Tuesday’s unveiling of Keneea Linton-George’s “Lady In Red” collection.

“So we’ve already aired Season 2, but we want to repeat it for those who missed it, and then we’re also trying to push an online counselling programme, which is already in effect. It’s part of the mission to help Jamaican youth.”

By her own admission, the twin experience of motherhood and marriage is a wonderfully life-altering one. “It’s fabulous. A lot of late nights, learning how to become a mom and a business woman,” she admits. “There are some tears. There are times when I go home, and I want to pull out my hair. But I have a fabulous husband who really helps, and I think that’s really important. So I’m enjoying it; I’ve never known so much love. But it’s rough.”

Meantime, Emprezz says she has traded her popular fashion boutique (Stanley & Emprezz) for a challenging new venture alongside husband, Steven Golding. “Yes, we closed the boutique. So I’m working alongside hubby with Café Africa doing African cuisine. It’s at Regal Plaza, at the corner of Ripon and Eureka Road,” she says. “So we do 25 dishes from 18 countries, and it’s been going great since February. We’re really just trying to build it. It’s the first of its kind in Jamaica.”

At this point in her journey, these are the kinds of transitional endeavours Emprezz seems most thrillingly passionate about. “[Café Africa] is like a new creative adventure for me,” she explains. “Food is like a fashionable thing, and the clientele loves it, especially those people who have lived abroad and have come home. People are really enjoying it.”