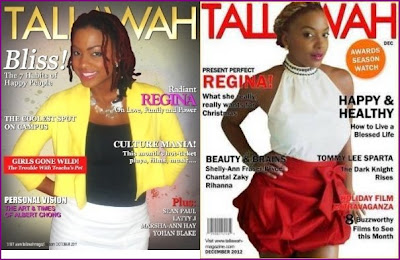 A whole lot can happen in the short span of a year. Take for instance the continuing evolution of our December cover girl, Regina Beavers. In October 2011, when she first graced TALLAWAH, Beavers, a former Miss Jamaica World, was gearing up for a foray into commercial theatre as the star of Basil Dawkins’ A Gift for Mom – in addition to making her mark as a presenter on CVM at Sunrise.

Fast-forward 12 months, and the 28-year-old beauty (possessed of gamine looks and serious smarts) has stepped into yet another chapter, making the transition from television to radio as the new cohost of FAME FM’s Monday-night gabfest Uncensored (alongside Rodney Campbell), even as she navigates a hot new romance and playing mommy to a fast-growing boy (Giomar is going on eight years old).

But perhaps the most telling difference about Regina these days is the onset of a bold newfound confidence. “I’m still hungry, still going forward. I’m happy with what I’ve been achieving,” she told TALLAWAH in November. “When I just started out, it was about learning the business and gaining my experience, but now I’m finally at the point where I feel like I can step out on my own and do something really big.”

So far we like the direction she’s chosen and the projects she’s aligning herself with, not least her new creative Christmas camp for kids, which kicks off this Monday, Dec. 17, at the Spartan Health Club. “We are now putting the finishing touches to everything to ensure that all goes well,” she tells me as we catch up inside Liguanea’s Café Blue on a sunny afternoon. “I know it’s going to be a success.”

Indeed, this new labour of love, as well as what Beavers is poised to take on next, underscores what she told TALLAWAH on the set of her recent cover shoot. “As I grow and as I build, I want to give back. I want to put myself in the kind of position that no matter what I’m doing, I’ll be able to assist the next generation or the next person beside me,” she said. “I honestly believe that to whom much is given, much is expected. I have so much further to go.”

Posted by TALLAWAH Magazine (tallawahmagazine@gmail.com) at 8:10 am