DUDLEY THOMPSON: The author-activist on Garvey’s legacy, the Manley family, and Jamaica’s real strengths and weaknesses 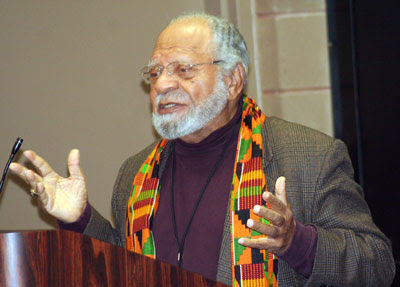 ON THE MARK: "I can see through the centuries that we have lived resilience."

The latest edition of the Jamaica Journal features an in-depth sit-down with controversial legend Dudley Thompson, who was among the dozens of Jamaican luminaries (home-grown and foreign-based) interviewed for this summer’s wonderful OnePeople documentary. Below, excerpts from Thompson in his own words:

Let’s talk about Jamaica. Tell me about the most impressive Jamaican you have ever come across.
You’ve cast my mind down a long road of ninety-five years of varied experiences and people, but I think outstanding, aside from Norman Manley, who was my first inspirer in the nationalist movement, was his son Michael Manley. Those I think are the people who really are the most impressive in my mind, in my life; Michael Manley because of his expanded view of the Jamaican role and its place in the world.

What do you think Jamaica has given you that has led to your success? Do we have something unique?
I think there is, not just to me but to Jamaicans. It is the inspiration of Marcus Garvey. Marcus Garvey was an inspiration because he brought to the African world not just a united group, his UNIA; he brought also these thoughts of Black Nationalism. Those were his thoughts of Black Nationalism; it’s that which drives us on.

What is our way forward out of garrison politics, practically speaking? How can we move away from this?
I think we are moving slowly out of it, but garrison politics is just one of the worms in our can; it’s just one of the big things we have to fight against. Until we discover and support our own Jamaican nationalism, until we do that, our troubles will never cease and our development will never succeed.

But you are still optimistic about Jamaica?
Oh yes. I am still very optimistic about Jamaica, and that is not just based on wishful thinking, but I can see through the centuries that we have lived resilience. I can see that more and more we are digging down deeply into our traditions and our strength. Any people who can become oppressed, downpressed, whatever you call it, who can pass through the miseries and the calamities we have passed through and yet we surge to fight, anybody who can live through those times must have a source of inspiration. We had it there down somewhere and we still have it, and it will come forward.

>>> To read the complete interview with Dudley Thompson, pick up a copy of the new Jamaica Journal, available via booksellers islandwide.