FILM OF THE WEEK: Amour probes deep to the heart of marital devotion and old age 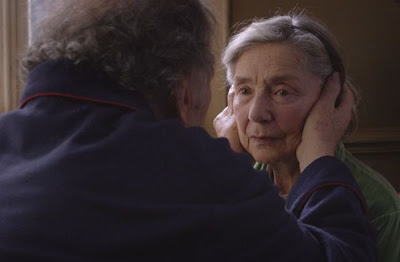 IN SIGHT: Riva and Trintignant play an inseparable aged couple.

A poignant and deeply affecting examination of age and marital devotion, Amour is without doubt one of the year’s most captivating cinematic experiences, anchored by a pair of mesmerizing lead performances by Jean-Louis Trintignant and Emamanuelle Riva.

As unmistaken evidence of the film’s power and wide-ranging appeal, when it was screened at the 2012 Cannes Film Festival in France earlier this year, it became an immediate sensation, going on to claim the festival’s grand prix, the Palme d'Or, for writer-director Michael Haneke. Since then, it has been selected as the Austrian entry for the Best Foreign Language Oscar at the upcoming 85th Academy Awards. At the recently held 25th European Film Awards, it was nominated in six categories, winning in four, including Best Film and Best Director.

A French-language drama with subtitles, Amour chronicles the last few months in the life of an elderly couple, Georges (Trintignant) and Anne (Riva), retired music teachers in their eighties facing the scourge of illness and old age with the valiance of seasoned warriors. But soon, especially in Anne’s case, it becomes a fruitless battle as two strokes render her bedridden. She staunchly refuses to live out the rest of her days in a hospital or a care home. It’s up to Georges to tend to her every need, with the aid of a nurse (who he eventually dismisses for her insensitivity) and grown daughter, Eva (Isabelle Huppert), who occasionally visits. The greatest pleasure of watching this haunting film lies in the achingly tender scenes that play out between the couple.

As directed by Haneke, the action takes place entirely inside their expansive apartment, showcasing their daily lives in minute detail but also the heartfelt interactions between them sure to bring to mind your grandparents or a loving elderly couple you’ve encountered at some point or the other. And in spite of this claustrophobic setting, the sequences that play out are never less than engaging, made all the more so by the wisdom and intelligence of Haneke’s writing and a relaxing musical score.

Amour (which literally means 'love') is easily one of the finest films you’ll see this year. Beautifully filmed and exquisitely told, it stays with you long after the credits roll. Tyrone’s Verdict: A