FILM OF THE WEEK: The Hobbit offers a spectacular but mildly satisfying return to Middle-Earth 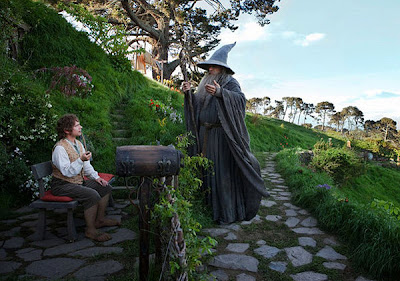 GREEN ACRES: Freeman (Bilbo) and McKellen (Gandalf) in The Hobbit.

It goes without saying that the mega-blockbuster The Lord of the Rings: The Return of the King is a tough act to follow, so in returning to that fantasy-ridden storyline that won him worldwide acclaim and a treasure trove of awards, director Peter Jackson has undertaken an immensely risky task.

As it so happens, The Hobbit: An Unexpected Journey, which transports viewers to where the adventurous series really began yields mixed results, boasting visual splendour, sweeping cinematography, and regular splashes of humour, but moves at a pace too plodding, and deliberate to truly captivate.

When good-natured wizard Gandalf (Ian McKellen) suddenly shows up at Bilbo Baggins’ (Martin Freeman) place in The Shire with the promise of an epic adventure, the visit sets in motion a series of events that spiral into an odyssey marked by fierce clashes between dwarves (led by the terrific Richard Armitage, looking to reclaim their lost kingdom), elves and orcs – and enough dark magic to last ten lifetimes. Among the highlights, of course, is an appearance by that rascal Gollum, with his “precious” never far from his side.

Given that The Hobbit is the first in a new trilogy (also based on JRR Tolkien’s books), it’s purpose is simply to serve as a precursor, setting the stage for the major fireworks that’s to come with the remaining two films. Tyrone’s Verdict: B