MAYLYNNE’S SECOND ACT: The actress on her new play, her blissful romance, and the epiphany that changed her life 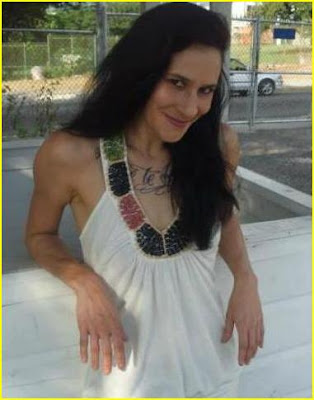 Sitting pretty at the back of the Little Little Theatre on this warm Thursday afternoon, Maylynne Lowe is telling me about her process for getting under her character’s skin in the hopes of giving a tour-de-force performance. “Usually I’m the nerd in the [cast]. I know my thing before everybody,” confesses the actress, currently treading the boards as the sole female star in Dangerous Ambitions, playing a down-to-earth woman caught in an unfruitful decade-long relationship.

“I feel a little anticipatory going into this new show,” she continues, “because I’m working again with [playwright] Basil Dawkins, with whom I did three shows in a row (Uptown Bangarang, Uptown Bangarang 2 and Which Way Is Out?), so we have a synergy. Plus, we have a fantastic cast that I have to live up to. It really is an honour.”

Before we know it, we’ve switched gears to talk about relationships and the current status of Maylynne’s love life. Like a love-crazy schoolgirl, the 36-year-old (who’s been divorced for seven years now) bursts into an infectious cascade of giggles as she reports that she’s happy in love with her new man. “Oh, it’s excellent. I’m very happy,” she says, blushing. “You know that if I don’t like it I’m not staying – with anything, whether it be man, woman, theatre, anything at all. If I’m not loving it, I am gone. But what I have now is something really special.”

Meanwhile, as she prepares to step into the dawning New Year, Maylynne says she fully intends to bring that same disciplined approach to matters of the heart and life into 2013 and beyond. For her, making the New Year another truly meaningful one is about getting the little things right. “It’s about work. It’s about getting up off my ass and being productive, even with my blues,” she observes. “Time really flies, and if you’re not careful you will have little regrets about this and that later on.”

If there’s one thing that her year-long hiatus from the stage has taught her, it’s that one should embrace the work that the universe is offering you. Turns out she received a much-needed wake-up call that appeared in the guise of an epiphany. “For the whole year that I was off theatre, I prayed and said, ‘Lord I want to do other things in my life. And my phone didn’t stop ringing for theatre productions when it wasn’t theatre that I wanted,” she explains. “So it’s about not being ungrateful, because there are a lot of actors who want a role and are not getting offers. You have to be careful. So I told myself that maybe this is my calling. Go to work.”

Now older and wiser, newly energized, and embracing the endless possibilities that the universe is offering her, Maylynne Lowe is determined to attain new heights in her personal and professional lives. “I’m ready to work again,” she tells me, with a hint of finality in her voice. “It’s about having fun at what you’re doing. I belong here. It feels right.”

>>> PART 1: Maylynne on what led to her hiatus from theatre and her spirited comeback