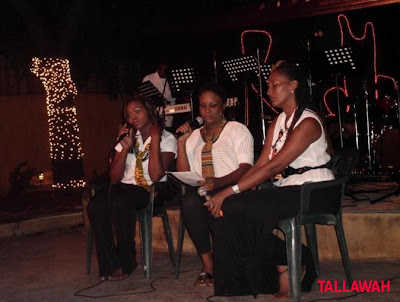 SISTERS WITH VOICES: Davis, Brown and Hewitt have their moment.

By the time I arrived at the venue at minutes close to nine, a female quartet was in the throes of “Four Women,” Nina Simone’s haunting paean to sisterhood, highlighted by a standout solo by Althea Hewitt. Elsewhere, the troupe delighted with choral performances of thought-provoking poems by the likes of Claude McKay and Sonia Sanchez, as well as original pieces by members of the group. Team leader Fabian Thomas, actor-writer Brian Johnson, actress-singer Shanique Brown, and songbird Cameal Davis were consistently engaging standouts.

Meantime, the night’s guest performers included singer Michael Sean Harris, quite vigorous for a man of his size, who rendered spirited original cuts accompanied by violinist Mijanne Webster. The pulsating jam “Wining on the Table Top” closed his set strongly. The fun then continued with the appearance of widely lauded singer-songwriter Tanya Stephens, who not only launched into a selection of her career hits, but also seized the opportunity to indulge us with her radical thoughts on modern-day relationships. “Relationships were never meant to be turned into an institution, and whoever did that should be institutionalized, “she quipped, eliciting a round of laughter and applause.

Stephens then performed cuts like “Take Care of My Man” and “It’s a Pity” before obliging a rather adamant patron with a few lines of “Boom Walk.” The troupe then reappeared, attired in eclectic costumes, to render a suite of harmonious tunes and bring the performance to a close.

Posted by TALLAWAH Magazine (tallawahmagazine@gmail.com) at 2:30 am