RICARDO GARDENER: The soccer star sounds off on the age issue, the mighty Mexicans, and the next World Cup 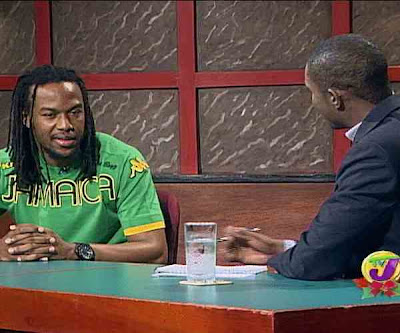 REPORTING FOR DUTY: "We have to push ourselves to the max."

Returning from injury and surgery and back with the Reggae Boyz squad for the upcoming Digicel Caribbean Cup and World Cup qualifiers, veteran defender and former skipper Ricardo Gardner is proving that at age 34, he can still hold his own on the soccer field with the best of them. The ex-Bolton Wanderers star was a guest on TV J’s Eye on Sports this week to discuss his delightful comeback and hopeful career prospects. Below, some highlights:

On why age is no determinant of ability to deliver on the field:
“To be honest, I don’t think age plays football. Because you have great players who play until they are 40 or 41. I think if the person is fit enough to do a job, then why not?”

On his current level of fitness:
“I think I’m exceeding the markers I’ve set. Right now, I just thank God for the opportunity and thank him for what he’s still doing for me. I mean, I’m here back in the national programme to give it my best shot. I’ve been training hard and doing everything correctly so I think I’ll be up for it…. As you go along, it builds up your confidence as a team and as an individual. So it up to us to perform to the best of our ability and push ourselves to the maximum.”

On overseas-based players readjusting to the national programme:
“It’s gonna be difficult; it’s not gonna be easy. Club football and the international level are two totally different things, so who knows? They have to just come and adapt as quickly as possible and come with their experience and add to what we have here. If we want to qualify, we have to do what we have to do.”

On facing the mighty Mexicans on their home turf:
“It was difficult, and it’s always going to be difficult going to Mexico. I mean going above the [ground] level that we’re used to playing is difficult, even going down the steps. 100,000 in the stadium. Whistles all around. You’re running and can’t even breathe properly. How difficult is that? It’s not going to be easy going there at any point, but we just have to prepare ourselves the best way possible.”

On Jamaica’s recent defeat of the United States at the senior level:
“We have no fear in our team now; things are more achievable now than back then. We believe in ourselves, and it’s the greatest feeling. Watching that match at home on the computer was a great feeling, knowing that we got past that hurdle – and with Theodore as the coach. Of course, I would’ve wanted to be a part of that moment, but it’s still a happy moment for me, even if I wasn’t there to help do the job.”

On Jamaica’s chances of going all the way to Brazil in 2014:
“I think we have the players to qualify for this World Cup coming up, but we will have to work double as hard as we working now. It’s going to be a tough task, we all know it. It will be tough to get there, so we just have to prepare ourselves in the right manner.”

Posted by TALLAWAH Magazine (tallawahmagazine@gmail.com) at 11:33 am