SISTER ACT: Etesia Ramsey dishes on finding her place in theatre and being Shebada’s sibling 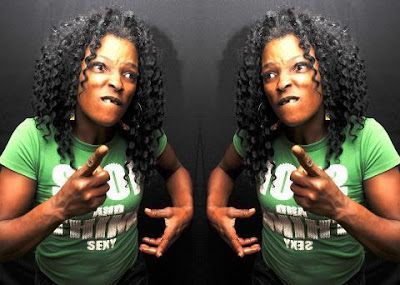 DOUBLE TROUBLE: Ramsey in character as Kim from her new play, Krosses.

Not surprisingly, one of the first things people want to talk about when they meet Etesia Ramsey is her famous younger brother, Keith bka ‘Shebada’ (three years her junior). But with her own acting career about to take off, the 37-year-old, who is gearing up to play a headstrong vendor in this month’s Krosses, wants audiences to get to know her and her distinctive gift for spiky comedy. TALLAWAH encounters a talented rising star:

Being the big sis has its perks:
“My brother introduced me to theatre and acting, and it’s been a whole lot of fun. I’m enjoying it,” says the mother of two, who hails from the tough community of Franklin Town. “But being Shebada’s sister has its advantages and disadvantages. It can be hard living up the expectations that people now have of me. They expect you to look a certain way and conduct yourself in a certain manner because he’s now a major superstar.”

Staying true to her own sense of self:
“Coming into theatre with my own identity is a plus for me, but it also means I have to work twice as hard because my brother has brought theatre to a whole new level,” confesses the Excelsior past student, last seen in Stages Productions’ De Weddin’ Scamma this past summer. “But I will always try to give to the public the best that I can.”

Eye on Hollywood:
“For the future, I want to continue to work hard, so that I can go from ‘roots theatre’ to even Hollywood. But for now, I am just giving thanks for what I have and try to be part of the mission of bringing people together because that’s what theatre is really about.”