FULL FORCE: McFarlane and Johnson participate in a recent rehearsal.

“Aspects of this play will bring into sharp focus some shocking realities, may even be frightening, but intended to be a cautionary tale calling for constant vigilance of our leaders and potential leaders in all areas of the country’s life.” That is precisely how Basil Dawkins pitches his forthcoming end-of-year production, Dangerous Ambitions, a star-studded dramedy set to debut at the Little Little Theatre in Kingston on Dec. 27.

Plot-wise, it’s a political fantasy set on an imaginary island where the political and social shenanigans of its movers-and-shakers, power-holders and power-seekers blur the line between what is legal/acceptable and corrupt. Dangerous Ambitions follows last year’s gritty, Thespy-winning smash Where Is My Father? and Get Your Black Hands Off Her, which enjoyed a quiet run at the Little Theatre this past October.

According to the playwright-producer, the cast was meticulously selected for the new production and is headed by stage veteran Volier Johnson, working alongside such familiar faces as Chris McFarlane, George Howard, Rory Baugh, and Maylynne Walton Lowe. 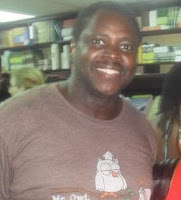 Director (and regular Dawkins collaborator) Douglas Prout is brimming with enthusiasm ahead of the show’s eagerly anticipated premiere. “To have the right mix of talent and experience is half the battle won,” he explains. “To have a cast that is this excited about a new play and enthusiastic to make the discoveries and not afraid to try new things and look at old things differently is a director's dream. They all want to excel.”

Dawkins readily concurs, while encouraging everyone to come and out and witness the action for themselves. “I am hoping those who see Dangerous Ambitions will encourage regular theatregoers [to come and see it as well],” he says. “And I’m hoping those who used to attend the theatre but have discontinued for one reason or another and those who have never attended to go see Dangerous Ambitions.”