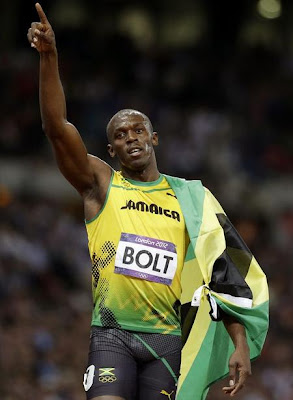 LEGEND: The star sprinter at the Summer Olympics in London.

From multiple golden runs at the London Summer Olympics to gracing magazine covers to garnering a raft of prestigious and richly-deserved accolades, sprint king Usain Bolt is living in the moment and having the time of his life.

Everyone can agree that when it comes to Jamaicans who ruled in 2012, no one came remotely close to exerting the kind of phenomenal global impact that the 26-year-old had on the planet throughout the past year.

Charismatic, charming, and supercool when he wants to be, he’s a terrific role model for youngsters: astonishingly gifted, extremely family-oriented, and never failing to leave a lasting impression. Not to mention, silencing his countless detractors by rising to the occasion when it matters most, and making a solid point of giving back to society through his eponymous foundation.

Still, if there’s one thing that has become clear in the wake of the London Games, it’s that Usain Bolt’s rock-star appeal runs deeper than what meets the average eye. Put simply, the sport of athletics needs him. It’s not just about shattering a world record or winning an Olympic gold medal for the second time in a row. In Bolt’s case, it’s really about the energy and optimism and sense of down-to-earth realness that he brings to the sport that’s made him a globally beloved superstar. A natural talent the likes of which the world has never before seen. A living legend.