TAKING THE LEAD: Who are theatre’s most remarkable actors of the year? Four to keep an eye on 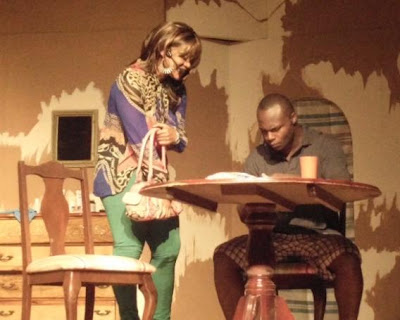 Bringing wrenching emotional depth and stunning conviction to the boards, theatre’s leading men are having the best year ever. Most distinguished of the bunch are these four awards-season hopefuls (in random order) whose performances truly rank among the most compelling portrayals to grace the Jamaican stage so far in 2012. Let’s hear it for the boys!

Carl Samuels in “God’s Way 2: Carlton’s Redemption”
As the embattled titular character, Samuels offered an intriguing antihero (opposite dueling divas Dahlia Harris and Nadean Rawlins), while helping to transform the fast-paced gospel drama into an edge-of-your-seat thrill ride. A star-making performance from the relative newcomer, previously seen in the School of Drama’s Ruined earlier this year.

Wynton Williams in “The Messiah”
The Father HoLung & Friends mega-musical benefitted tremendously from Williams’ riveting, utterly charismatic take on the Son of Man, which lent the production an effective anchor. He’s played Moses to critical acclaim, but it seems Jesus is a role tailor-made for Williams.

Keiran King in “Mr. & Mrs. Blacke”
A deeply introspective two-hander marriage drama, Blacke featured a powerful lead role by King, sharing a largely convincing rapport with co-star Keisha Patterson. King has been here before, taking home an Actor Boy for White Witch, so it remains to be seen if he can repeat in the category or land his first Thespy nod for acting.

Dennis Titus in “Stanley, Fay, Pularchie & P”
The magnificently acted and revived 1930’s drama chronicling the travails of a husband a wife, featured Titus doing some of the best work of his career as a hardworking husband whose past comes back to terrorize him. One of the year’s breakout names, Titus played the part impeccably with wonderful support from the likes of Sherando Ferrill and Suzette Barrett.

>> Who missed making this first cut: Glen Campbell in Yard 2012 and Garfield Reid in Scandal.

Posted by TALLAWAH Magazine (tallawahmagazine@gmail.com) at 11:55 am