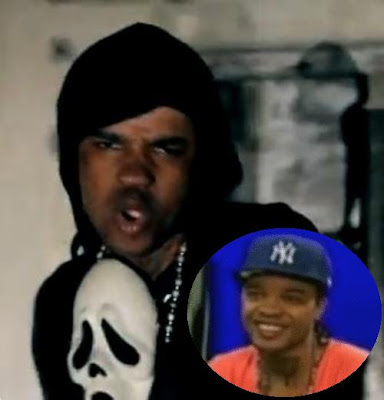 Who’s afraid of Tommy Lee Sparta? Depending on who you ask, dancehall’s man of the moment does come off as an intimidating presence, due in large part to the dark, edgy route he’s taking to music superstardom. Unsurprisingly, Tommy’s penchant for hellish imagery mixed with gangster posturing doesn’t sit well with the elder statesmen of contemporary dancehall (Ninja Man, Bounty Killer to name only a few), not to mention scores of older folks and parents who fear their impressionable teens are being influenced negatively by such popular hits as “Psycho” and “Shook.”

But like many of his musical peers, Tommy Lee says he’s simply projecting an utterly distinctive image and vibe in an entertainment field saturated with deejays who look and sound alike. “Most of my style is based on the movies I watch. It’s entertainment. You have to have a distinct image for the fans,” he told the Entertainment Report this past summer, adding that the youngsters who account for the bulk of his hardcore fanbase, understand what he’s about. “The kids get it, man. They understand exactly what’s going on in the world (Laughs).”

Like him or loathe, you can’t ignore him. He’s everywhere and his creative output is gradually seeping into cultural consciousness at large. To wit, his lyrics have even wound their way as punchlines into the scripts of two of the latest stage plays (Scandal and Courthouse Drama) doing business in the capital. And this is really saying something for the 24-year-old father of five, who hails from St. James and has assumed leadership of the Gaza Empire in the wake of Vybz Kartel’s incarceration.

Now, he’s staking his claim as the primary headliner of Sting 2012, alongside such seasoned veterans as Busy Signal and Ninja Man. Though he’s no overnight sensation, it’s quite a leap in such a short space of time.

Overall, Tommy Lee Sparta (alongside his Uncle Demon alter ego) seems intent on redefining the image of the modern dancehall hotshot. But is he a flash in the pan or the real thing destined for longevity in the fickle, unpredictable industry? It remains to be seen. But as it stands, he’s on a roll, a bonafide winning streak that has placed him smack in the centre of the pantheon of 2012’s deejay-of-the-year contenders.

Polarizing as he may be to be some, he’s certainly got everyone’s full attention with a bold look and cache of tunes steeped in catchiness and masculine confidence. “Music purifies the soul,” he tells ER, “Any kind of music. Once you’re in a bad mood, and you listen to it, it just makes you feel better.”