IN SIGHT: "I'm in love with the stage all over again."

Whether working alongside a star-studded team (Pularchie, this month’s Glass Slippaz) or flying solo as a recording artiste and stand-up comedian, Donald ‘Iceman’ Anderson consistently makes it clear that he’s never short on spark and good old-fashioned charisma. The livewire actor is gearing up to thrill audiences anew in Jambiz’s end-of-year musical comedy Glass Slippaz, taking on multiple characters opposite costars Alaine Laughton and Glen Campbell. TALLAWAH catches up with the super-busy Anderson, at the height of rehearsals, to talk about creative challenges, growth, and his main goal in life.

TALLAWAH: How do you feel about the character(s) you’re taking on this time around?
Anderson: In Glass Slippaz, I play Prince Sheggy, a beggar, and the drunken fairy godfather. Playing three characters in one show is a first for me, and it’s really a stretch. But I feel that so far I’ve been doing some great work as we prepare to open on Boxing Day. The cast is under good direction from Trevor Nairne and Patrick Brown, so it’s coming together nicely.

Over the years, in what ways would you say you’ve been pushing yourself as an artist/entertainer? 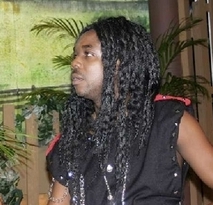 From role to role, it’s usually up to the actor to push himself because each role has its own set of challenges. In this case, as I said before, it’s a first for me playing three characters in one production, but it has made me a lot more focussed. And it feels good.

You’re also known for bringing the funny on the stand-up comedy circuit and in your burgeoning music career. Do you have a favourite mode of expression?
I’d say I love all of them, from music to stand-up to theatre. I’m under new management now with Donovan Watkins of Rockstarz Entertainment, and he’s really encouraged me to get back into acting. And I feel like I’m in love with the stage all over again. I’d have to say that acting is my first love.

What’s your main goal in life these days?
To be the best entertainer that I can be and to master all the genres that I’m involved in and bring my thing to another level. The most important thing for me right now is building my legacy.

Any advice for youngsters eyeing a career in theatre and live comedy?
Don’t believe the hype, and don’t watch the glitz and glamour. Just do the work. Don’t come into the business with the wrong intentions. The business is bigger than everybody so just focus on putting in the work and making a mark talent-wise.