WHAT WE CAN BEAR: With its twists and turns, God’s Way sequel electrifies and entertains 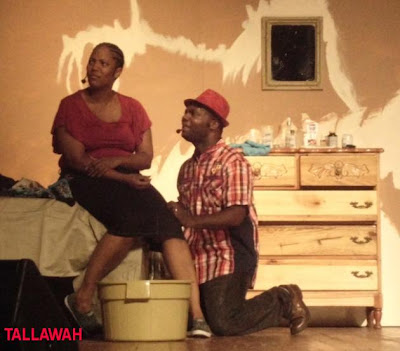 PLEA BARGAIN: Harris and Samuels are caught in a troubled marriage.

God’s Way 2: Carlton’s Redemption has everything a great play should have: it’s profound and introspective, and has spectacle and humour, not to mention a director’s dream team of actors, whose effortless chemistry elevates the production to fantastic heights of power and poignancy. Even when the scripture-infused dialogue teeters close to the cringe-worthy edge of preachiness, akin to Tyler Perry movies, you can’t deny that the core message is both universal and unmistakably relevant.

You don’t have to be conversant with the finer details of the plot of the award-winning prequel to follow and enjoy the story. After five years in prison, Valerie’s (Harris) drug-dealing husband Carlton (Samuels, superb) returns to Jamaica to face the music and a dramatic change in the high-end lifestyle he’d been previously accustomed to. A once gorgeous home filled with all the trappings of “success” has given way to the zinc fences and painful hardship of life in the volatile inner-city. It’s palpably humbling, to say the least.

This absorbing story is as much an account of Carlton’s road to redemption (or recidivism?) as it is a meditation on Valerie’s tribulations as the good, Christian wife, scarred and embittered by the scandalous turn her life has taken at the hands of a man she loves unfailingly and supports through thick and thin.

But their marriage’s true test comes with the arrival of Kayla (Rawlins), a woman from Carlton’s past who can only be described as calculating and dangerous. She reminds me of the matriarch in the acclaimed Australian drama Animal Kingdom. The numerous verbal clashes between Harris’s Valerie and Rawlins’ Kayla are among the play’s most intensely edge-of-your-seat highlights.

Harris and Rawlins are simply superb, so too Ainsley Whyte, who reprises his role of Deacon (now boasting a head of gray), so supportive of Valerie that their closeness is understandably misconstrued as more than a church brother/sister relationship. The show’s real revelation, however, is relative newcomer Carl Samuels, who ideally embodies the gruff, mad-at-the-world alpha-maleness that the lead role calls for. Nuanced and strangely charismatic, it’s one of the year’s star-making performances.

Delving into such themes as adultery, lust, greed and a messy love-triangle with the ferocity of a merciless bulldozer, God’s Way 2 is intricately plotted with unexpected twists and turns that speak highly of Harris’ evolving gifts as a writer – and as a director who knows how to bring all the elements together into a gripping whole.

Overall, there’s next to nothing to complain about. With its realistic set and costuming and apt lighting, God’s Way 2 is another hugely entertaining work by DMH Productions and a satisfying evening at the theatre, offering revelatory insight into relationships and human nature, as well as profound resonance for not only Christian audiences but for anyone who’s ever paid a price for love. Tyrone’s Verdict: A-

MORE THEATRE:
Ones to Watch: Check out these awards-season contenders