COURAGE UNDER FIRE: Is Lisa Hanna the worst-performing minister in the Simpson-Miller cabinet? Miss Hanna pleads her case 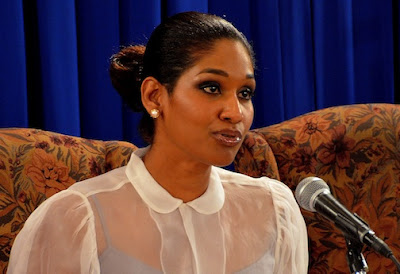 STAYING THE COURSE: "Grade me on the objectives that I set out to achieve."

“That [criticism] is something that all of us politicians go through,” Lisa Hanna is reported as saying in an Observer report, in response to recent criticism that singles her out as the worst-performing minister in the Portia Simpson Miller-led PNP government. “Sometimes you know, as media people, that behind the veils there are other things at work. But, I would just ask all our well-thinking Jamaicans to recognize that the ministry that I'm in charge of has to do with social policies, and in many instances, social policies illicit emotions because sometimes it's not concrete and steel.”

In recent weeks, Hanna’s stewardship of her Youth and Culture portfolio has come under scrutiny, but especially in the wake of tragic circumstances involving young girls being held in adult prisons. Standing her ground, the 37-year-old minister says she refuses to entertain anything negative. “I don't mind being graded, but certainly grade me on the objectives that I set out to achieve. And, if you look at the things that I have sent out to the media, the things we set out to achieve, we have achieved them,” says Hanna.

Meantime, vowing to stay the course, Hanna emphasizes that her ministry plans to place greater emphasis on optimism and positive results going forward. “While we embark on what we are doing, I ask Jamaicans to also realize that our children need more love. The time you take to cart a child off to the police station... that child may be having severe depression problems.”

Hanna, also the Member of Parliament for South-East St. Ann, was speaking to the media during a recent visit to Fort Augusta in St Andrew to speak with some of the juvenile wards at the facility. Chief among Hanna’s plans for 2013 is the construction of a suitable facility to house juveniles currently being held in adult correctional facilities across the island.