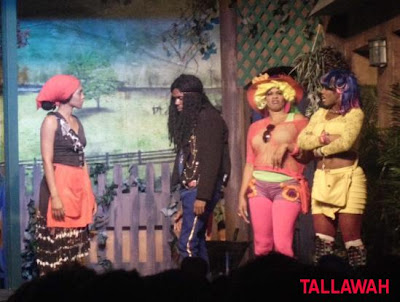 Buoyed by witty writing and solid acting, infectiously catchy tunes and superb visual/sound effects, the musical comedy Glass Slippaz puts forward a convincing case as to why it is the hottest ticket in town. In short, it’s by no means perfect but it’s a wonderful production, hilarious in its comedic moments and heartfelt in its more sombre ones. I enjoyed it immensely.

A Jamaicanized reimagining of the classic Cinderella story (from the prolific pen of Patrick Brown), the show stars Sakina Deer (alternating with Alaine Laughton) as the humble but quietly ambitious Cindyrelisha, who is grossly overworked and underappreciated by her evil stepfather, Mr. Cruff (Courtney Wilson) and wicked stepsisters Drizella (Sharee McDonald-Russell) and Prunella (Natalee Cole).

When beloved megastar Prince Sheggy (Donald Anderson) comes a-seeking a “princess” to spend the rest of his life with, it sets into motion a fascinating series of events that forever changes the lives of the show’s vibrant characters. But none more so than Cindy, played by Deer with a mix of intelligence and radiant charm.

Deer is sensational, fitting snugly into the role while displaying effective singing ability and occasionally commanding stage presence – especially during her big musical numbers like “We Can Do It.” Audiences, meanwhile, will love to hate McDonald-Russell and Cole as the pair of rambunctious, illiterate, and multi-coloured Cruff sisters, while commending Wilson for his strong turn as their despicable dad.

But you’ll root most vociferously for the excellent duo of Glen Campbell (as yard-boy turned shot-caller Simple) and Anderson, who bring their sharp, well-honed comical skills to this high-energy, tuneful party. And speaking of tunes, all of the actors prove that they know their way around a song, making the production all the more a full-fledged team effort, complemented by splendid lighting, a decent set design, and a beautifully told story.

Glass Slippaz represents a marked improvement for Brown and the Jambiz gang over last summer’s disappointing Yard 2012. But where Yard fell short on truly engaging humour, Slippaz rides an infectious, cathartic high, boasting such clever, observant lines as “This is Jamaica; two things wi not short of: second-hand car and hot gyal.”

Ferociously funny and replete with vigour and optimism, Glass Slippaz is a must-see. Tyrone’s Verdict: A-