PLAYING THE PART: Deon Silvera on portraying a helper, the energy of Fifty 2 Rahtid, and doing great work 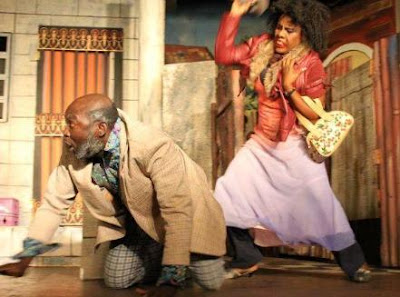 SHE'S A HIT: Silvera whips costar Chris McFarlane in Back-A-Yard at the Pantry Playhouse. Below: the actress sits for a TV interview.

Ever since she brought to life a madwoman in Dahlia Harris’ Back-A-Yard to award-winning acclaim last season, Deon Silvera has been itching to tick off yet another item from her bucket list: portraying a housekeeper.

As it turns out, the veteran actress didn’t have to wait too long to do just that, as she’s currently turning it out in Scandal at the Stages Theatreplex in New Kingston. Stepping into the role of a put-upon housekeeper, which was left vacant following Abigail Grant’s departure for the United States, Silvera is bringing her brand of comic exuberance to the production, which also features the likes of Garfield Reid, Chris Daley, and Belinda Reid.

“I have never played a helper before, and as you know I’ve been doing this for many years,” says Silvera, calling by telephone. “But I have played similar roles over the years, of course, but never a helper.” So how has she been finding this first-time experience? “To be honest, I went into it expecting it to be somewhat of a challenge, but it’s not. It’s been going extremely well so far, so I can’t complain.” 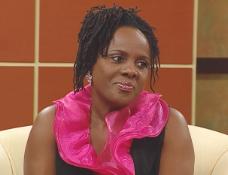 While Silvera is now busy bonding with her newfound second family at Stages, this past summer saw her reuniting with longtime colleagues Aston Cooke and Dahlia Harris to perform in the deliriously entertaining Fifty 2 Rahtid.

“I loved the energy of the show. It was just wonderful reuniting with the team, because Jamaicans have loved the show from we did the first Jamaica 2 Rahtid several years ago, and the chemistry between me and Dahlia was still there,” observes the stage vet, who captured last year’s Best-Actress prize (Back-A-Yard) at the Actor Boy Awards. “And the new guys like Akeem and Ainsley were just fun to work with. I loved the energy.”

Always keeping her eyes on the horizon, Silvera, whose numerous stage credits also include unforgettable dramas like Judgement (pictured above), says she’s hoping for more career highs in 2013. “What I’m really looking forward to the most this year is doing some more challenging work,” she tells TALLAWAH. “Because once the work is being done, anything else that you want will come after.”