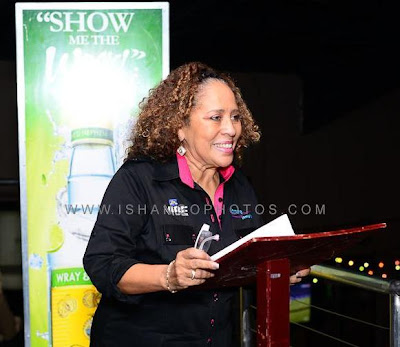 ALL IN THE DETAILS: Thame speaks at the recent season-two launch. Below: a group of young professionals in attendance.

“We are excited to have this partnership with Television Jamaica and we look forward to a compelling season of programming that will have our viewers glued to their television sets.” So proclaims executive producer Angela Thame in reference to the eagerly anticipated second season of the Monday-night gabfest JN Vibe, which got a well-attended launch recently inside Usain Bolt’s Tracks & Records.

The show, previously titled The Vibe, is a partnership between Panache Entertainment and Jamaica National Building Society, which gladly came on board as the title sponsor of the new season. “The focus on lively, fun television taken by The Vibe, covering current issues in the country is very appealing,” notes Leon Mitchell of Jamaica National. “At [JNBS], we see its eclectic programming mix as a powerful force helping to crystallize values and ideas current among younger Jamaicans who are carving a space for themselves in our emergent social landscape.” 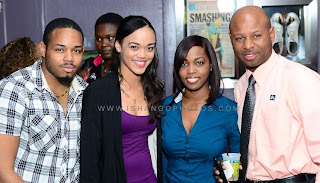 Fully aware of its power to impact lives – and in an industry generating new talk shows every other month – the creative team behind JN Vibe is quick to emphasize that among the show’s objectives is the aim of re-defining the Jamaican television landscape by primarily including the views of young Jamaican professionals in innovative ways. Says senior producer Sonya Stewart, “I am thrilled to be part of the team that will drive the next 13 weeks of hard talk, social commentary and discussions from young professional minds capable of sparking change in the corporate world, while sharing their views in a relaxed environment.”

As for the faces viewers can expect, in addition to George Davis (returning from season one), ZJ Sparks, Rodney Campbell and Kaysia Johnson will bring their no-holds-barred opinions to the programme each week as the new and ever-dynamic co-hosts. TUNE IN: JN Vibe airs on TV J every Monday night at 9:30 with a repeat on Wednesdays at 6:30 pm.