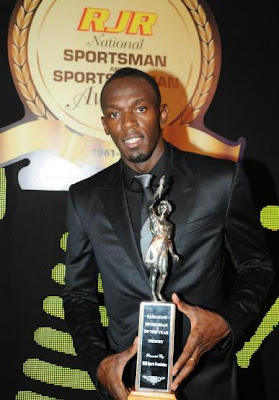 MAN OF THE MOMENT: The sprinter holds up his 2012 Sportsman of the Year trophy.

What makes a legend most? An illustrious, decades-long body of work? A singular groundbreaking achievement? …… While countless folks are in agreement that six-time Olympic gold-medallist, Jamaica’s Usain Bolt – the first man in sporting history to successfully win the sprint double at two consecutive Summer Games – is worthy of such a lofty title, there are those who remain skeptical even now.

The issue bubbled to the surface again over the weekend at the RJR Sports Foundation Awards, where Bolt (as anticipated) was named Jamaica’s Sportsman of 2012 and took to the podium to express his gratitude. In doing so, the sprint champ also seized the opportunity to give himself a little “legendary” pat on the back. “I’m a great athlete. A lot of people would say I’m not a legend, but I’ve worked hard this season to satisfy myself as a legend,” he told the packed Pegasus Hotel ballroom audience, which responded with a mix of clapping and laughing. By all accounts, “Bolt as Legend” will remain a polarizing subject for years to come.

Meantime, the World’s Fastest Man also showed some love to his parents, coach, training partner, and genuinely loyal fanbase. “I’ve said this once already, and I’ll say it again: Thanks to all my true fans, not the waggonists them,” he remarked to more laughs and claps. “And I’d like to thank God because without him none of this would be possible. Continue supporting me, and I’ll continue doing my best.”

Posted by TALLAWAH Magazine (tallawahmagazine@gmail.com) at 12:49 am

Email ThisBlogThis!Share to TwitterShare to FacebookShare to Pinterest
Labels: Awards and Prizes, Bolt 2013, Commentary, Do I Smell a Controversy?, RJR Sports Awards, Sports