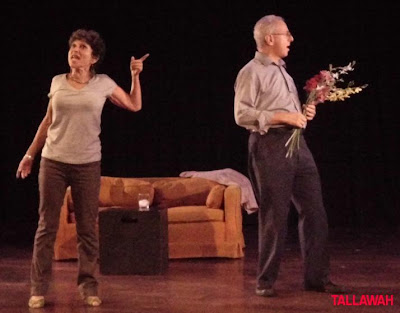 DYNAMIC DUOS: Nicholson and Issa in Who's Afraid of Virginia Woolf? Below: Ellington and Scott in Apologies.

A nimble production and one of the most fascinating concepts ever brought to the Jamaican stage, Eight by Ten made a welcome return to UWI Mona’s Philip Sherlock Centre last Tuesday night, assembling a group of eight talented directors presenting a range of ten-minute theatrical pieces, full of everything from rib-tickling humour and dramatic tension to traces of mystery and riveting suspense.

Bringing the show to a wonderful close, Brian Heap’s Come Into The Garden, Maude was a stylish, well-acted and campy look at what happens when nosy neighbours meet their comeuppance. It starred Jean-Paul Menou as John, a hapless fellow who receives strange late-night phone calls from a woman (Zahara Warner as Phoebe) claiming his cat is making strange noises in her garden next door.

But what starts out as an innocent-seeming case of “wrong number” soon evolves into a bizarre telephone encounter that culminates quite mysteriously yet still managing to deliver a sense of sly satisfaction. Menou, meantime, fashioned an interesting look at war and the impact on the lives of those caught in the crossfire with Field Day, performed by Roxroy McLean and Dacoda Mitchell, as a pair of soldiers trapped in a minefield behind enemy lines, who spend the time chatting about life while learning of each other’s personal struggles as explosions go off around them. 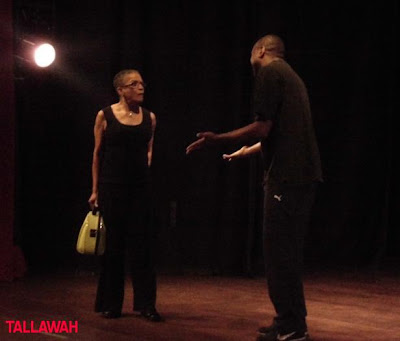 The elements of surprise and ‘expect the unexpected’ certainly fuelled Pierre Lemaire’s superfunny Apologies (a two-hander starring Alwyn Scott and Fae Ellington), with the dialogue of a single word, “Sorry,” in every scene. Joan Belfon’s Can You Still Hear Me? You’re Breaking Up smartly looked at infidelity and friendship from the viewpoints of two pals (Marlon Walker and Nicholas Amore) while Forever Blue from Michael Daley offered a fascinating ‘what if’ account of role reversal featuring a possibly pregnant man (Martin Thame) and his ambivalent sweetheart (Shanique Brown). Full of fireworks, intensity and heart.

Speaking of fireworks, there was plenty to go around in Paul Issa’s excerpt from Edward Albee’s now-50-year-old stage monster Who’s Afraid of Virginia Woolf?, starring Hilary Nicholson as the vicious Martha, a meaty role forever immortalized by the late Liz Taylor; Keiran King as the uptight Nick and the target of Martha’s vitriol; and Issa as the feckless George caught in the middle. Providing moments of quiet revelation and insight, it offered a liquored-up, occasionally amusing yet utterly respectful salute to a classic.

And Eight by Ten would not be complete without noteworthy participation from our new-generation talents, and this year Akeem Mignott (rendering a terrific excerpt from Fabian Thomas’ Word Soul) and Julene Robinson (giving a bravura turn in the hilarious, Nadean Rawlins-directed Me and My White Boy) certainly made their presence felt. Very much like Eight by Ten itself, the future looks vividly bright for these two lavishly gifted young actors, whose stars are certainly on the rise.