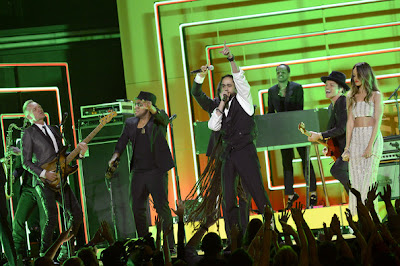 “It’s not often that reggae entertainers are invited to events like this, so I’m just thankful that Bruno and the crew invited us to be there,” said Damian ‘Junior Gong’ Marley, speaking with the Hollywood Reporter after Sunday’s spirited Bob Marley tribute at the Grammy Awards in Los Angeles. Junior Gong was part of the tribute that also included Sting, Rihanna, Bruno Mars, and his brother Ziggy.

Though surprisingly short, the tribute (a bonafide crowd favourite of the night) packed a solid punch. Mars started out the segment with his own smash “Locked Out of Heaven,” and then Sting joined him onstage for a rendition of The Police's “Walking on the Moon.” Rihanna, Damian and Ziggy then came onstage for a crowd-pleasing performance of “Could You Be Loved?”

“I think it was great,” said the three-time Grammy winner. “As a child of reggae music, we always like to see when reggae is put upon a pedestal and, of course, the Grammys is one of the highest pedestals in the world, so we are glad to be a part of that,” said Damian, adding that the group of performers put together for the tribute was “complimentary of reggae music.”

Posted by TALLAWAH Magazine (tallawahmagazine@gmail.com) at 10:50 am