MERLENE OTTEY: An honorary doctorate – and how she really feels about her Jamaican roots 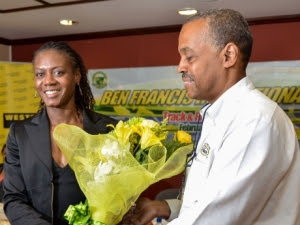 IN FULL BLOOM: Ottey accepts a bouquet from Grace Foods CEO, Michael Ranglin, on her arrival in Kingston yesterday.

Legendary sprint queen Merlene Ottey (who now calls Slovenia home) arrived in the island on Monday evening, landing at the Norman Manley International Airport, where she was met by a handful of relatives (including her mom), the government’s Natalie Neita-Headley and organizers of the Ben Francis Invitational, where Ottey will be bestowed with a special honour this Saturday.

“My love for Jamaica will never die. I will always be Jamaican,” said Ottey, during a welcome reception at the airport shortly after her arrival. “I want to thank my mother because without my mother I wouldn’t be here. I remember all the sacrifices she made for me. So thank you, Mother.”

In addition to the Ben Francis honour, Ottey will also receive an honorary Doctor of Technology from the University of Technology (UTech) to be presented during Saturday’s Ben Francis meet at her alma mater, Vere Technical, in Clarendon.

Arguably Jamaica’s most decorated female athlete, Ottey holds the record (seven) for the most Olympic Games appearances and most medals won (14) at the World Championships. For a record 15 times, she was named Jamaica’s Sportswoman of the Year.