IN SIGHT: Marlon Samuels on how being temporarily blind truly opened his eyes 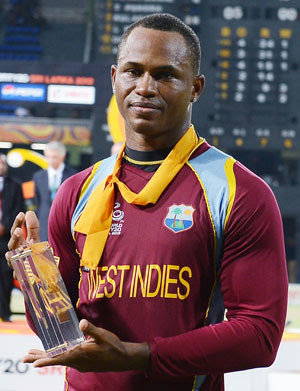 AWARD WORTHY: Samuels, photographed with a Man-of-the-Match award in 2012.

Ace Jamaican cricketer Marlon Samuels opened up to the Style Observer last week about his recent bout with temporary blindness, the result of an injury he suffered during a heated match recently. “It was a very difficult time. I had no vision in the right eye. Even when I physically opened the right eye, there was no vision there. Whenever I closed my left eye it was total darkness,” Samuels, 32, explained. “I’m accustomed to having both eyes functioning, so it was just hard. I had to sit upright all day and night for two weeks, as I couldn’t lie on my back with this specific injury.”

The star sportsman, who made a recent donation to visually impaired students of the Salvation Army School in Kingston, said despite the enormous challenges, he never once lost hope while patiently waiting to recover his 20/20 vision. “It took my own brush with blindness to discover that the West Indies had a blind cricket team,” he quipped. “I never gave serious thought to the idea that my career could end there. I still had a lot to do: work to be done, people to help… It couldn’t end like that for me!”