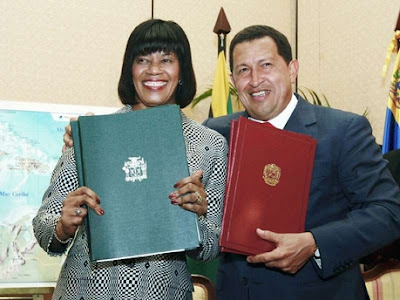 Jamaica’s Portia Simpson-Miller has added her voice to the flood of tributes from global political figures in salute of the late Venezuelan President Hugo Chavez, who died Tuesday afternoon in his beloved homeland. The populist leader, who had been battling cancer for the last two years, was 58.

“Although it was well known that President Chavez was battling very serious health issues, I was always of the view that the brave and courageous fighter that he was would have led him to overcome the challenge with which he was afflicted,” the Jamaican prime minister said in a statement. “This was not to be and we will have to live with the reality of him not being with us anymore.”

Simpson-Miller said, too, that Chavez’s vociferous yet committed approach to leadership aided him tremendously in his defence of the rights and welfare of the most marginalized and vulnerable in his country and to correct inequalities in the wider Americas and Caribbean region.

“His call for conscience and persistent efforts to introduce and maintain the operation of the PetroCaribe agreement is a living testimony of the high esteem in which President Chavez held the people of Jamaica and the region,” said Simpson-Miller. “I will miss him dearly. On behalf of the government and people of Jamaica I express sincere condolences to his family and the government and people of Venezuela during this period of grief.”

Taking the floor in Parliament, Opposition Leader Andrew Holness also lauded the late South American general. “Regardless of whatever is said about him when we have a chance to have that formal tribute in the House,” remarked Holness, “we can say definitively here and now that he was a good man with a good heart, and he had a special place in his heart for Jamaica.”

Posted by TALLAWAH Magazine (tallawahmagazine@gmail.com) at 12:19 am