THE REAL THING: It's all about staying true and keeping it real for Terri Salmon 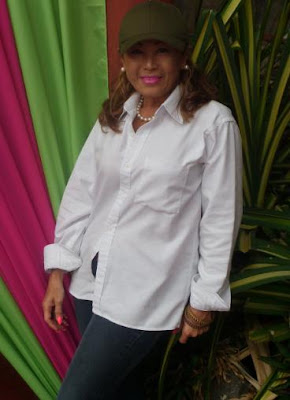 CLASS ACT: Salmon discusses her art and nudity in theatre.

The new revival of the National Pantomime Company's Skoolaz is currently in the midst of a spirited run at the Little Theatre fuelled by youthful exuberance, infectious energy and delightful musical numbers that frequently incite audience members to sing along. Veteran stage actress Terri Salmon knows exactly what I'm talking about. "I did the very first Schoolaz in 1989, and that show ran for months," offers Salmon, reminiscing on her illustrious acting career with TALLAWAH on sunny Thursday afternoon in Kingston.

It's this sort of passion for the work that has kept the award-winning actress/producer going over the years both here in Jamaica and the UK, where she works regularly with the Blue Mountain Theatre Company. These days, Salmon is back on the island co-hosting CVM's The Naked Truth, spearheading her very own Goddess Theatre (which recently mounted a superb revival of Rhone's Two Can Play) and keeping her eyes open for her next big project. In any case, though, Salmon's mind is never far from the stage. And like a proud practitioner of the arts, she wants to see our local theatre community grow.

At the moment, she likes what she's seeing. "I think it is an evolution. I am welcoming this change," she says. But, of course, she has her concerns. "I went to see Eight by Ten the other night, and I was so taken aback by Nadean's piece (Me and My White Boy) because it seemed to me that we are finally and gradually embracing things like nudity on stage. As I watched it, I said to myself, 'Yes, we are finally headed where we are supposed to be going in Jamaica, gradually embracing where are supposed to be going with Jamaican theatre. I used to wonder when would the Jamaican theatre scene finally embrace nudity on stage. Without us even looking at the person and saying, 'Oh, she is nude', because the acting is so good."

As it turns out, Salmon has her own nudie past that she doesn't hesitate to share. "I will never forget when I first did nudity with Blue Mountain Theatre for the show I've Got Your Man about five years ago," she confesses. "I was only topless, but I will never forget when the DVD came out here. My own theatre people were so critical of it. And I was saying to myself, 'When are we gonna get beyond this?' And it wasn't even the older ones who were critical. But people on street loved the show."

Even today, Salmon says the backlash still confounds her. "Nudity is nothing in London. Sometimes the entire cast is nude for a particular show. But you don't focus on the nudity because the acting is so good," she says. "When we did [I've Got Your Man], we had to have held-over shows because of how well it was received."

I mention to her that last December David Tulloch mounted Risque, Jamaica's first R-rated drama (featuring full-frontal nudity), which enjoyed a decent though limited run at the St. James-based Fairfield Theatre, with a Kingston remount planned for sometime later this year.

For Salmon, it's all about letting go, without compromising on the twin virtues of class and quality. "Personally, I think there is something holding back theatre in Jamaica. I don't know what it is. I can't put my finger on it," she observes. "We need to just let go if we are going to be artists, if we are going to be actors, producers. Stop the pretense and just be real. Be real when you're writing. Don't choose to write about downtown and then you'e going to sanitize it. For what? It's not gonna be authentic. With art, you have to be true to what you're saying and what you're doing."

That's precisely the kind of ideology Salmon hopes will help take Goddess Theatre to terrific heights. "That is my whole objective with Goddess," she says. "I'm not trying to change Jamaican theatre because I know I can't change theatre. But I plan to put in some more solid work."

NEXT TIME: Salmon gets real about motherhood, getting ready for age 60, and what she's most proud of.

Posted by TALLAWAH Magazine (tallawahmagazine@gmail.com) at 9:10 am