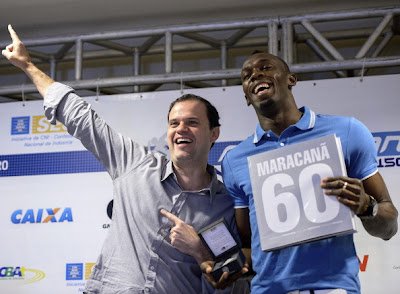 This Easter holiday has turned out to be quite a superbusy period for two of Jamaica's iconic track superstars, Usain Bolt and Asafa Powell, who are making their presence felt (in their trademark fun-loving styles!) with exploits overseas.

First up is the World's Fastest Man who has flown to Brazil to take part in the Mano a Mano 150 M race challenge in Copacabana Beach in Rio de Janeiro. Since landing in the pristine South American country, Bolt has visited the Futuro Olimpico (or Olympic future) project alongside Antigua's Daniel Bailey, tested his soccer skills and bonded with some of the local kids and future track stars. Above, the Jamaican Olympic gold medallist Bolt smiles with a book about Maracana Stadium after a news conference to present the 'Mano a Mano' challenge at the Windsor Atlantica, sharing share lens time with Andre Lazaroni, Sports secretary of Rio de Janeiro. 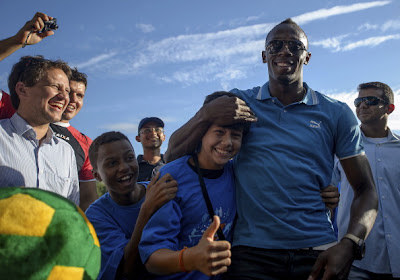 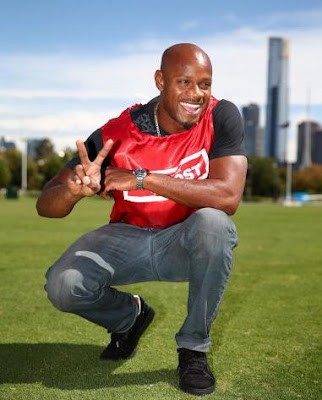 Meantime, Asafa Powell's Australian sojourn so far has included attending a Stawell Gift media call at Grandstand Oval on Wednesday in Melbourne where he raced with local children sponsored by McDonald's. Powell, who will be running in the 2013 Qantas Melbourne World Challenge, slated for April 6, jetted into Melbourne on Tuesday morning, and later kicked off preparations for the big race, which will take place at the Lakeside Stadium in Albert Park. Powell, who has run 9.72sec in the 100m, also faced the local media in Melbourne on Wednesday afternoon for a running sequence of interviews. 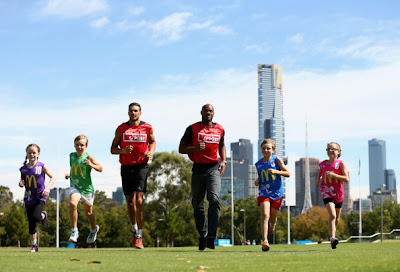