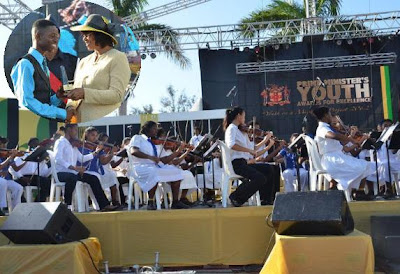 Hosted inside the spacious Emancipation Park under the theme "Youth on a Mission...Project 2062," nearly 45 outstanding young Jamaican men and women, ages 15 to 24, were celebrated for their achievements during the past year at the Prime Minister's Youth Awards ceremony on Sunday evening.

YOUTH IN SERVICE:
Jordan Bennett, founder of the non-profit organisation known as Feeding of the 5,000

JOURNALISM:
Basilia Barnaby. Responding on behalf of the awardees, Barnaby, who currently works at LOVE 101FM, said the Prime Minister’s recognition of the talent and contribution of young Jamaicans to nation-building and her statement of encouragement and commitment to her cause, represents a significant gesture, “which I and all the nominees will continue to be so grateful.”