RUNS IN THE FAMILY: Sparingly staged and well-acted, 'Brown Water' seeps under your skin 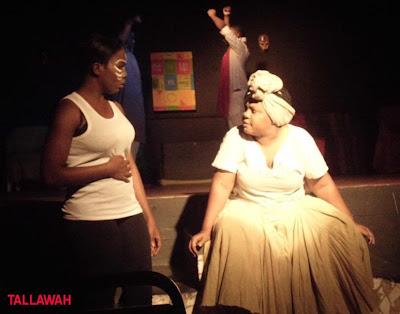 SOULS ON FIRE: Brown and Braham share an intense scene.

"I love to run. Nobody loves kicking up dust like me. But I love my mama." So confesses Oya, the likeable and highly driven young woman at the centre of Tarell Alvin McCraney's In The Red and Brown Water, a powerful and soul-shaking work now playing at the Pantry.

As you can well imagine from Oya's thoughtful confession, she is conflicted by choices. Not only must she must choose between staying by the side of her ailing Mama Moja (a terrific Susie Braham) or pursuing her ambition of becoming a first-class runner, she also finds herself torn between the two handsome, vastly dissimilar men vying for her attention and affection: the stuttering Ogun (Sean Bennett) and the arrogant Shango (Ramone Gordon). Will she choose one over the other, or live out her days as a woman alone?

With its minimalist set and exquisite storytelling (using ancient African myths to tell urban ones), McCraney's play transports us to a mythological housing project in the American South, where struggle is real, love and a sense of community flourishes, yet freedom clashes with captivity, as well as the desire to extricate oneself from emotional pain. And in the midst of it all is Oya, wonderfully portrayed by Shanique Brown, among the latest of Fabian Thomas' exciting discoveries, who makes it clear that she is a confident and competent young actress with talent and emotional generosity to spare. 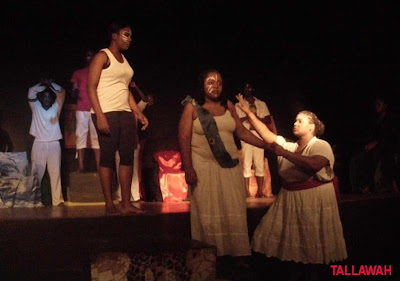 The supporting cast is equally appealing, with the likes of Noelle Kerr, Hanief Lallo, and Shawna-Kaye Burns (as Oya's busybody aunt Elegua) turning in quite impressive performances. Bennett and Gordon are also strong, but it is Braham who most compellingly conveys authority on the stage with her convincing portrayals of the no-nonsense Mama Moja and an equally fastidious hoodoo woman.

Among the first things that arrest your attention is the play's unorthodox staging (which features actors seated on-stage throughout the night), the face paint that adorns one half of the actors' faces, and the curious inclusion of stage directions in the spoken dialogue. If nothing else, this sort of outside-the-box approach only serves to heighten viewer interest while appearing to set McCraney's work apart from his contemporaries and attesting to Thomas' love of mounting plays steeped in sheer soulfulness.

There are moments that lull, particularly in the show's first half, and at times I found myself growing anxious about the direction of the story, but overall Brown Water succeeds in capturing our imaginations with its extraordinary tale of human destiny, dreamers, and the universal message that family love, and indeed time, heals all wounds. Tyrone's Verdict: B