TILL DEATH DO US PART: Passion and tragedy collide in brutal, beautiful Blood Wedding 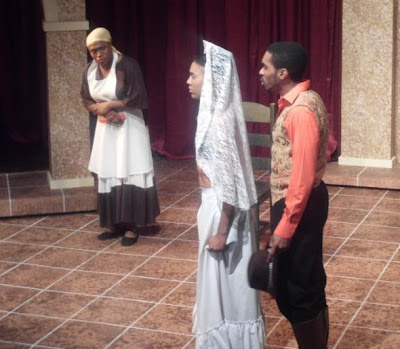 Anyone familiar with the oeuvre of Spanish playwright and poet Federico García Lorca can attest that he wrote great central parts for women, very much like his American colleague Tennessee Williams (A Streetcar Named Desire, Cat on a Hot Tin Roof). Among Garcia's finest works are the classics La Casa de Bernarda Alba, Yerma and Bodas de Sangre (Blood Wedding), the latter recently mounted by a spirited cast and crew at the Edna Manley College's School of Drama. It's a visually sumptuous and well-wrought production, despite minor hiccups.

Beautifully written with just the right poetic flourishes and some lovely, lyrical speeches, it isn't hard to understand why the play quickly became a sensation following its 1933 debut. At the same time, it might be set in thirties Spain, but its themes of unrequited love, family dysfunction, and passionate tragedy speak directly to our present age.

Inspired by real-life events, Blood Wedding chronicles the story of a pair of doomed young lovers, identified as Bride and Bridegroom (Anique Herbert and Ricardo McFarlane), whose arranged union is overshadowed by dark forces intent on keeping them apart. And that includes the dashing and devious Leonardo (Oneil Dacres), who ill-treats his wife (Candice Mais) and pines for the bride, with whom he'd previously had a fling, by all accounts.

Throw into the mix the groom's crabby, disapproving mother (powerfully played by Neekah Whyte); the bride's feckless dad (Paul Wilson); and a cackle of gossiping girls, and you have a molotov cocktail poised for explosion. The festive wedding day being the moment of choice. 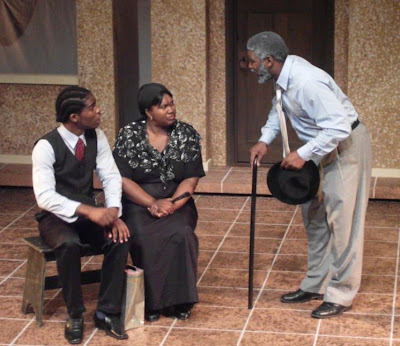 As staged by these energetic student actors, under Robert Clarke's free-handed direction, the production has a melodramatic, soap-opera feel in its early stages, but once the storyline starts to take on vibrant colours, the action grows in intensity, and the plot manoeuvres towards its shattering conclusion, the whole thing comes alive brilliantly.

And that includes the performances. As the domineering mother of the groom, Whyte is a revelation, revealing a potent gift for cutting to the emotional core of a complicated matriarch. It's a captivating performance, made all the more intriguing thanks to a near mastery of the Spanish accent, something a few of Whyte's peers fail to achieve as fluently. Dacres and McFarlane, meanwhile, bring raw alpha-male masculinity to their roles. Herbert delivers a few flashes of brilliance as the wanton bride but doesn't convey the requisite emotional depth to enrich the performance.

I must make special mention of the performers Shaneece Walters and Owen Boyd, who portrayed, respectively, Death/Beggar Woman and The Moon in a few short scenes. Highly commendable work. As designed by Ron Steger (set), Calvin Mitchell (lighting), and Barry Moncrieffe/Stacy Ann Banton (costumes), the production is a visual feast of shocking colour and an ode to traditional Spanish living.

Like other works by Lorca, Blood Wedding traffics in difficult and dark subject matters (death, envy, pain), but there's a curious lighthearted touch to this staging that makes it a truly engaging delight steeped in passion and principles of pleasure. Tyrone's Verdict: B+