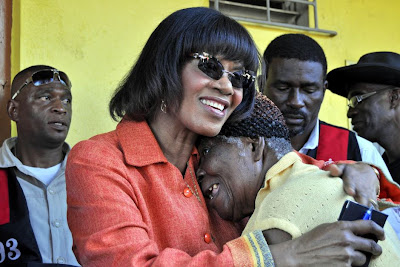 Joining the global call for an end to violence against women, Prime Minister Portia Simpson-Miller says it’s time to put gender equality at the forefront of the national agenda.

JAMAICA is proud to join the global community in the observance of International Women’s Day on Friday, March 8. The United Nations theme for 2013, “A Promise is a Promise: Time for Action to End Violence Against Women”, is timely and resonates not only with our women but every sector of the Jamaican population. We cannot ignore the unacceptable and horrible incidents of violence committed against our women and children. With strong commitment and conviction, ending violence against women is a top priority of my government.

After 50 years of nationhood, and while we celebrate the accomplishments of our women in so many areas, we must do all that is possible so that our women and girls can fully enjoy the benefits of living in a nation where womanhood is celebrated and gender equality is at the forefront of the national agenda.

On this International Women’s Day, it is with renewed commitment that I call on all Jamaicans – the political representatives, women and men of influence, mothers and fathers, people of faith, young adults and senior citizens, to be part of the change for a better Jamaica. Let us, as a nation, reaffirm our commitment to eliminating violence against women and girls as well as all other barriers which prevent them from living safe, healthy and productive lives.