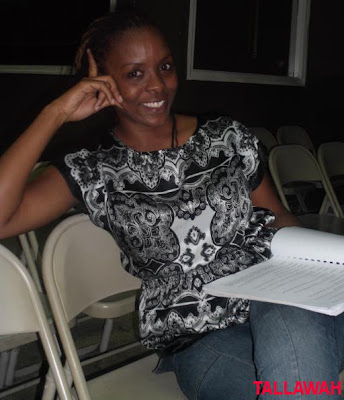 A QUICK STUDY: "I'm really challenging myself with this production."

It's a little over 24 hours before Janella Precius steps under the bright lights of New Kingston's Stages Theatreplex to make her acting debut (as a "stoosh" 30-something female) in Thicker Than Water, Dahlia Harris' buzzworthy new drama that delves into modern womanhood and the art of workplace survival. By her own admission, Janella is not quite ready to go before an audience.

"It's the day before the show, and I'm still struggling," she confesses to TALLAWAH ahead of rehearsal on Thursday evening. "I think it's mainly because I'm a bit of a perfectionist why I am beating myself up."

Still, Janella has good reason for taking such a hardline approach. "I don't like to flop," says the St. Lucian-born actress and Carimac alumna, better known to Jamaicans as a news anchor at Television Jamaica, possessed of an engaging presence and a refined speaking voice. "I just always believe that if you're doing something, you have to do it to the best of your ability. 100 percent you have to put in there, and I think that's what I'm aiming for."

TALLAWAH: What's the core message of Thicker Than Water, and what do you hope audiences take away from the experience of seeing the play?
Precius: I think a lot of people can relate to this play, the main themes. It's about working in the public and the private sectors -- the in-fighting that goes on, the back-biting. And these are just some of the elements that will come out in the play. A lot of people will be able to relate to it because I think at some point in everybody's life you have a situation where you think that somebody doesn't like you because of something or whatever reason. And then you have the other theme of family. Interestingly, there are two characters in the play, where it would seem that they're constantly at it, but deep down they're family and they stick together. It also has the theme of friendship. So a lot of people will be able to relate to [the play].

Outside of media, what do you like to do? What are your other interests?
I like going to see plays. (Laughs). The last one I saw was Glass Slippaz. That was very entertaining. I'm a very laid-back person, so a lot of people ask, How come I don't see you out that often. It's because I don't go out. But I'm based in Kingston, so every now and then I do things for entertainment like go to the movies, hang out with friends, probably have a drink. But that's basically it. I'm a very simple, easy, laid-back kind of person.

So I guess your boyfriend is the one who gets most of your attention outside the media spotlight.
Of course. My number one fan (Laughs).

How does he feel about you making this foray into theatre?
To be honest, he seemed more excited than me at first because I was a bit skeptical about it. But he was like 'You need to go for it. Challenge yourself because it is something new, and it is a challenge.' So that's what I'm doing -- challenging myself.

What's the story behind that peculiar surname of yours?
St. Lucia, where I'm from, is a French creole-speaking country. So we're bilingual; we have French creole and English. Now, if you go to St. Lucia, you will find a lot of surnames with French influence. So you have the Duveauxs, the Beaubrons, and then you have me, Precius. A lot of people here will say Precious and that's okay; I've gotten used to it. I really don't have any hang-ups. I would love it if people got it right, though.

You turn 35 on Saturday of this week. When you were about 21, what did age 35 seem like?
Olllddddd. Even when you were a teenager you would think that everyone in their late 20s or 30s are old people. And now you find yourself in that position. But it really isn't bad. I think being in your 30s is the best thing ever.

Really?!
I think so, because you approach life differently. In your 20s you're still trying to figure it out, so to speak. But when you touch 30, 31, everything just starts to feel, yeah...

Posted by TALLAWAH Magazine (tallawahmagazine@gmail.com) at 1:14 am